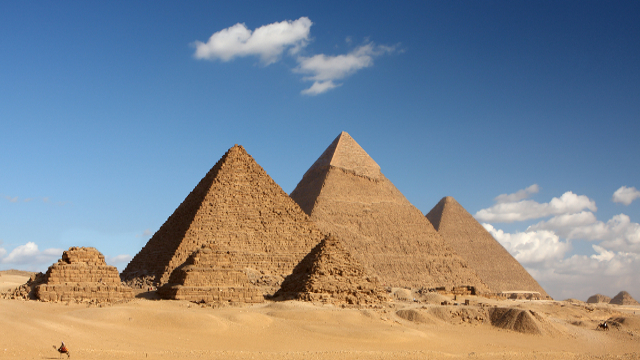 One hundred thousand slaves tug multi-ton blocks across the desert. A complicated series of pulleys lifts each hand-cut stone into the perfect place. This is history’s image of ancient Egyptian pyramid construction.

What if the Egyptians were using an easier, more efficient method? Recent theories and scientific evidence suggest that people assembled cement blocks on site to construct the exterior of the pyramids. Here’s why everything you thought you knew about how we built the Great Pyramids is probably wrong

Materials scientist Joseph Davidovits suggests a more realistic way to look at how the pyramids were built. Unconvinced of Egyptian abilities to construct and move large blocks to create the pyramids, Davidovits posits that Eqyptians molded blocks from limestone and vegetable matter available nearby. These blocks, built on site, are then used to build the pyramids. Existing only as a hypothesis, Davidovits later supported his idea using X-Ray Diffraction data, a technique common in chemistry and material science

Pliny the Elder, a historian and Naval Commander in Rome during the first century C.E wrote Naturalis Historia , an early attempt to construct an encyclopedia. Pliny the Elder makes several references to Egyptian created “formed” stones, particularly in the creation of vases:

In this way occurs a multitude of heaps (of minerals) which can be transformed into real rocks. They Egyptians make vases in this way…

Granted, Pliny wrote thousands of years after the creation of the pyramids, but this notation provides evidence of a cement-like technology used by the Egyptians two thousand years ago.