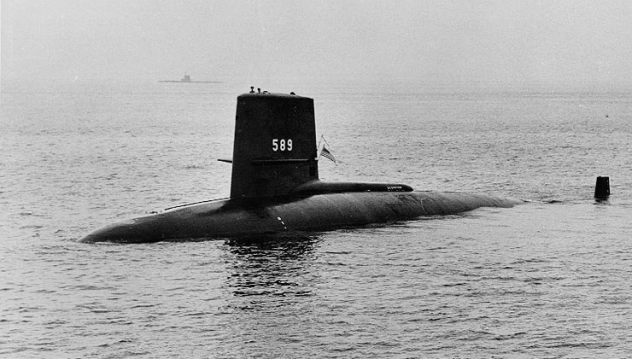 In February 1968, the submarine USS Scorpion departed from Norfolk, Virginia, and headed toward the Mediterranean. It had almost a decade of reliable service behind it, and there were no qualms about the journey as the sub set out to the open sea. Three months later, the Scorpion ran into unknown trouble, and its broken pieces ended up scattered on the ocean floor. On May 27, 1968, family members of the Scorpion‘s crew waited in vain on a dock for their loved ones to return. It was October before the Navy would find the wreckage of the Scorpion and realize the horrible truth—that all 99 men onboard had lost their lives.

Investigations into the cause of the tragedy proved fruitless, even after Robert Ballard visited the site in 1985. He soon moved on to bigger things when he discovered the wreck of the Titanic that same year. In 2012, calls were made for new expeditions to the Scorpion‘s wreck site so that experts can once again try to fit the pieces of the mystery together.

Nothing came of this, and the theories continue to fly. Some conspiracy theories hold that the sub may have been downed by a Soviet attack that they never saw coming, while others believe that a mishap with one of the Scorpion’s own torpedoes may be to blame. Experts believe that if the sub had mistakenly fired off a torpedo during training, it would have turned back on itself and hit the sub, which would have been the closest and possibly the only target at the time. Others are adamant that if the sub’s propeller shaft malfunctioned, it may have caused stress to the engine coupling. This might have led to it breaking, causing water to overrun the sub.

The only thing certain about what happened to the USS Scorpion all those years ago is that some family and friends still wonder to this day what exactly happened to the 99 men out there in the ocean on that fateful May day.