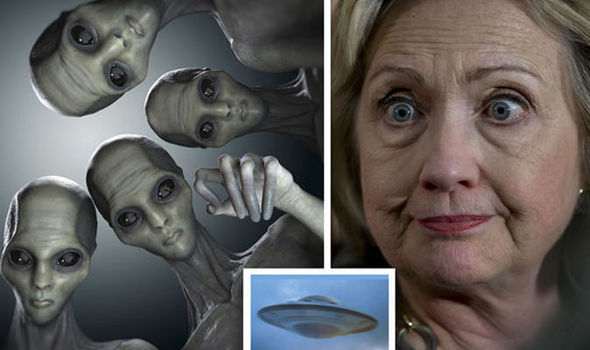 The Democratic candidate Hillary Clinton said she also wants to open up on what is happening at the mysterious Area 51 military base in Nevada, where UFO conspiracists believe evidence of alien technology is hidden away.

Clinton claimed she would “get to the bottom” once and for all of questions and controversy over what the US Government does or does not know about the mysterious subject.

For years conspiracy theorists and UFOlogists have claimed that various governments have evidence of alien visitations and that they have been withheld from the public amid fears over the potential impact on religion and the rule of law.

Clinton has long had the support of the UFO movement for previously showing more than a passing interest in the topic.

But now she has cemented her stance on the view so no one among the so-called UFO disclosure movement is in any doubt when they go to the ballot box.

US PRESIDENTIAL hopeful Hillary Clinton has conceded she may be blocked from revealing if the truth about alien visitations is “out there” if it is deemed to compromise national security.

Mrs Clinton, and her campaign manager John Podesta, have been claiming for months she will open the so-called top-secret X-Files if she makes it into the White House.

But, taking part in a radio talk show with a man who claims he was abducted by aliens, she accepted she could be blocked.

The Democrat frontrunner was campaigning in East Harlem, New York, when she took part in the Power 105.1 Breakfast Club.

Asked by one of the show’s hosts, Lenard McKelvey – also known as Charlamagne the God – who believes he was abducted by aliens several times, if she would really deliver on her quest for truth about UFOs and the top-secret military base Area 51 in the Nevada desert, she said simply, “I am.”

She said: “I mean, if there’s some huge national security thing and I can’t get agreement to open them, I won’t, but I do want to open them because I’m interested.”

Yes, I’m going to get to the bottom of it,” Clinton told The Conway Daily Sun’s Daymond Steer during a recent meeting with the paper’s editorial board, referring to the UFO mystery.