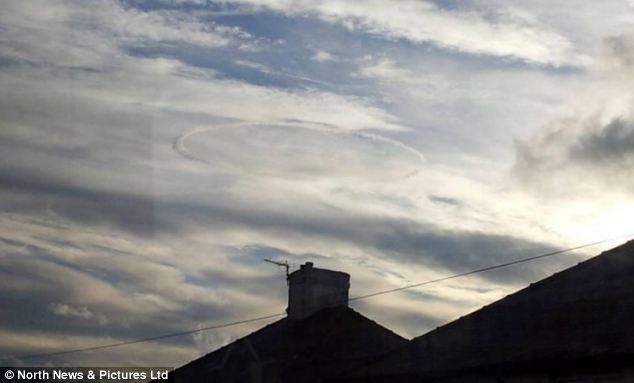 A UFO-like object floating in the clouds was caught on camera on the same day ten dead birds were found in a nearby garden.

Calum Sherwood, 23, was shocked to see the outline of what appeared to be a UFO while riding on a bus in Salterbeck, south of Workington, Cumbria, on Monday.

Sharon Larkin, UFO enthusiast and Mr Sherwood’s friend who lives nearby, found ten dead birds in her garden that day.

Ms Larkin claims that ‘dead birds are associated with sightings of UFOs’, and experts are divided over the cause – with some believing it could be a rare cloud formation, while others believe it could be ice crystals from a jet engine.

She claims the area, which is close to Sellafield nuclear power plant, was a hotspot for unusual activity.

Ms Larkin said: ‘There is something about this picture. The line around the edge of the UFO is very clear and very specific.

‘I’ve shown it to other people and some people have suggested it might be an unusual cloud formation, but the perimeter is very clear and I don’t think that’s the case.

‘What’s really strange is that the day Calum took this picture I discovered about ten dead birds in my garden, the back and the front.

‘They were sparrows and blackbirds. It could just be a co-incidence but the discovery of dead birds is associated with sightings of UFOs.’

A spokeswoman from the Met Office said: ‘It looks like a it’s just a persisting circular contrail (a condensation trail of ice crystals produced by jet engines at high altitude

There’s patchy high cirrus cloud around, so the atmosphere is moist enough to allow contrails to last for some time.

‘It’s hard to tell whether the contrail is above or below the cloud around it but we suspect that in some places it is below, and the grey bits are then where the contrail shadow falls on the cloud beneath it.

‘It’s unusual for a civil aircraft to be doing this sort of thing so it’s probably military.’

Ms Larkin said she had also heard unusual noises in the sky which sounded like ‘metal being scraped against metal’. 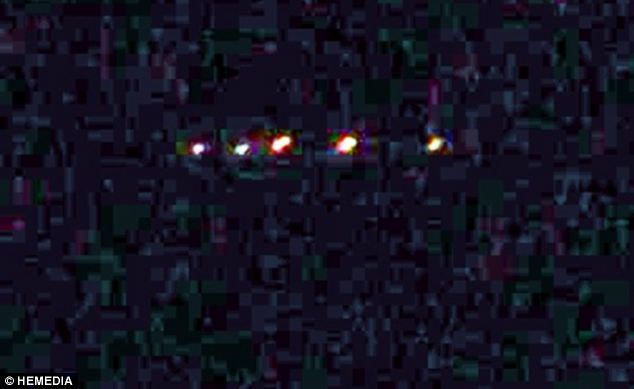