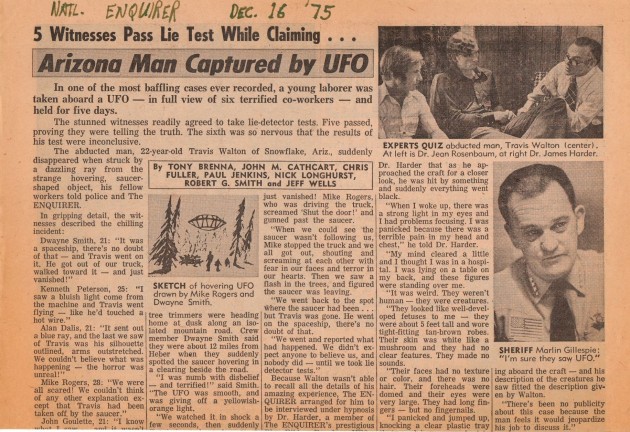 Travis Walton is an American logger who was allegedly abducted by a UFO on November 5, 1975, while working with a logging crew in the Apache-Sitgreaves National Forest in Arizona. Walton reappeared after a five-day search.

This is another well-known case, made even more famous since it was the subject of the motion picture Fire in The Sky. Here’s the story.

On November 5, 1975, Travis Walton was a young man working for the National Forest Service, clearing brush in the Apache-Silgreaves National Forest outside of Snowflake, Arizona. He was on a work crew with six other men. While riding back from work in a single, large truck at about 6:00 p.m., the crew saw a red glow through the trees. Thinking it might be a budding forest fire, they decided to take a closer look.

When they got to the location they found a large UFO hovering above a clearing in the forest. Walton got out and ran towards the craft. A beam of light shot down from the disk, striking him. It lifted him up from the ground, then knocked him back down, hard. The other men, in fear for their lives, jumped in the truck and took off, leaving Walton behind. A few minutes later they saw a light shoot straight up into the sky and disappear. They figured it was safe to go back and turned around to get Walton. When they got there Travis Walton was gone!

Or so the local sheriff thought. He immediately began an investigation into the murder of the missing Travis Walton. After all, the story his friends were telling sounded unbelievable. However, lie detector tests showed that the men were not lying and the sheriff was unable to break their stories.

Travis Walton showed up six days later and twelve miles from where he was last seen. Walton said that he had been taken aboard a spacecraft and kept there. At one point early in his adventure, Walton says he tried to run away down a corridor of the ship. During this time he encountered the classic small gray aliens with large heads and small mouths that never moved. He also saw some of the large “Nordic” aliens. These were men, over 6 feet tall, with muscular builds and long blond hair.