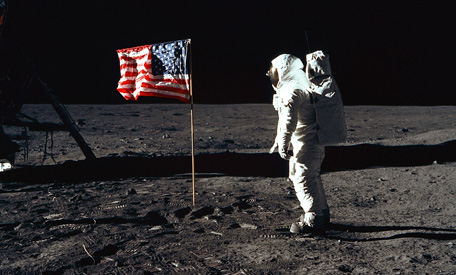 the US company Golden SpikE, which is run by former NASA managers, plans to use existing rockets to send missions to the moon – for around $1.6bn (£1bn).

Rather than being targeted at individuals (though billionaires will be able to buy such trips), the company is targeting countries with the lunar exploration missions. It is hoped that the flights, cheaper than launching a country’s own science programme, will appeal to “mid-size” nations.

“We can make it affordable for mid-sized countries like a Korea, an Indonesia, or a South Africa to be in the business of lunar exploration, which would cost them a great deal more to invent that capability,” said Dr Alan Stern, the president of the company and Nasa’s former associate administrator for science.

So far only 12 men have walked on the surface of the moon since the first lunar landing in 1969. However, Golden Spike said market research had shown 15 to 25 nations can afford lunar exploration and may want to do so.

Golden Spike plans to use existing rockets and spacecraft, now under development, to fly Nasa astronauts to the International Space Station, to take customers to the moon. A first trip could take place in 2020, and would require an investment of $7bn to $8bn.

Following that first mission, the company said, the cost would drop to $1.6bn for a trip – in which two customers could travel.

“We’re not just about America going back to the moon. We’re about American industry and American entrepreneurial spirit leading the rest of the world to an exciting era of human lunar exploration,” said Dr. Stern.

However, the company said there are a range of reasons why customers may want to fly to the moon: “scientific exploration, national prestige, commercial development, marketing, entertainment and even personal achievement.”

For their money, customers will spend at least 36 hours on the moon – with the amount paid for the trip equating to $740,000 per minute. Each trip will include two moonwalks, and the company will provide accommodation for 50kg of lunar samples to be brought back to earth.

Highlights of the trip could include a visit to Surveyor III, the third unmanned US lunar exploration craft; scientific instruments left from previous Apollo missions; and various craters.

Trips would be expected to take place once every six months following the first expedition.

However, the success of the business venture will depend on a certain number of trips being booked. Dr Stern said that only selling three or four missions would not be enough to get the project off the ground, “but we do not need to sell ridiculous numbers”.

He did not elaborate on any existing customers or suppliers.