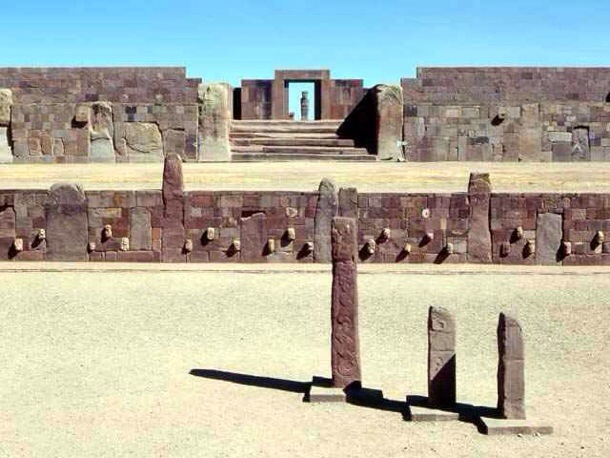 Tiahuanacu (also called Tiwanaku) is a mystery because of its age (estimated to be 17,000 years) and the peculiar stone technology.

Today there is little doubt that Tiahuanaco was a major sacred ceremonial centre and focal point of a culture that spread across much of the region. The ancient people built a stone pyramid known as the Akapana 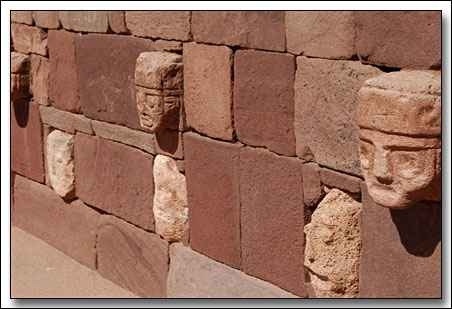 When first discovered the pyramid was largely covered with soil. After several decades of excavation some of the walls have been uncovered and treasure hunters opened a depression in the top. This was built originally to open towards the east.

A mystery of the ruins of Tiwanaku lying on the border of Bolivia and Perú.

Between 10 to 20 thousand years ago, Tiwanaku was in its glory. But now, the massive fallen stones which were used to build this massive city lie scattered about, having at one time been tossed about just like popcorn in a skillet.

The stones are so large that even today, it would be a technological marvel to take them from the mountainous quarry they were brought from, fifty miles away.

Lying close to Lake Titicaca, these ruins lie at approximately 13,000 feet above sea level. It appears certain that it was once a seaport. It still has the ruins of extensive docks lying on an earlier shoreline. In Tiwanaku’s heyday, one of these docks could have accommodated hundreds of sea-going vessels!

There is evidence that Titicaca was once a saltwater sea. Its shoreline is littered with millions of fossilized seashells. The marine fishes and seahorses in the lake are all oceanic types found only in salt water.

Researchers are convinced that these 3 miles high ruins once lay at sea level. Therefore, an incredibly devastating earthquake could have torn the city asunder, lifting Tiwanaku and the lake to where they are now.