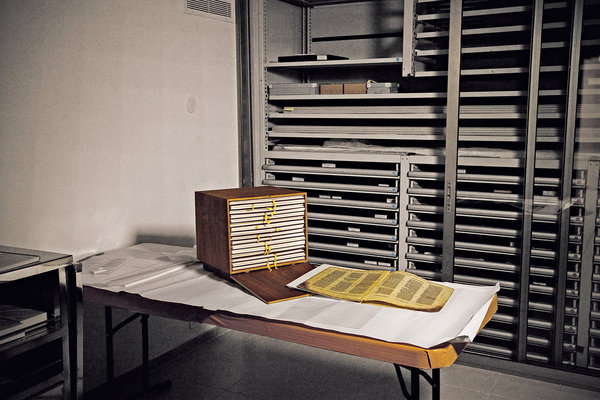 The oldest and most complete known text of the Hebrew Bible is stored in a secret vault in the Israel Museum.

In 1989, Israel Television appointed Sutton to investigate the whereabouts of the missing pages. Sutton, after immigrating from Aleppo, served as an intelligence officer and a Mossad operative with considerable distinction. He even had experience rescuing precious documents: On June 6, 1967, in the midst of the Six Day War, Sutton, who was responsible for running agents in enemy territory, received an urgent cable instructing him to find an antiquities dealer named Dino, whom they suspected was in possession of one of the Dead Sea Scrolls.

Sutton and other officers arrested the man and his son, who both emphatically denied the allegation, but after learning that a conversation they had in their jail cell about the scroll in question had been recorded, they confessed. “He realized that the game was up and began cooperating,” Sutton told me when we met in his home near Jerusalem in late May. “He took us to his home and began counting floor tiles. Five this way, four that way. Then he finds it and brings a plunger for clearing drains, uses it to lift two tiles, under which there’s a layer of straw. I tell him, ‘Pick it up yourself,’ because it may be booby-trapped. He picks up the straw, and under it there’s a shoe box. I go, ‘Lift it.’ So he lifts it. I go, ‘Open it.’ Inside, there’s more straw and two cylinders wrapped in cellophane and tied with red ribbon.” They turned out to be the Temple Scroll, the longest of the Dead Sea Scrolls.

It seemed fitting, then, that Sutton should lead a worldwide investigation into the mystery of the missing codex pages, and the conclusions of his inquiry were groundbreaking. A number of testimonies indicated that the codex survived the fire intact, or almost intact, and that it had also reached Israel intact. The suspicion now shifted from the Aleppo Jews to whoever held it in their possession after Murad Faham brought it to Israel. Shortly before he died, Shlomo Zalman Shragai, whose colleague took the codex from Faham at the port in Haifa, told Sutton that the manuscript reached him almost intact. Earlier this month, Shragai’s son told Ezra Kassin, as part of Kassin’s ongoing investigation, that he was present when the codex was brought to their home and that he definitely saw that “only a few pages were missing, three or four, all the rest were intact.”