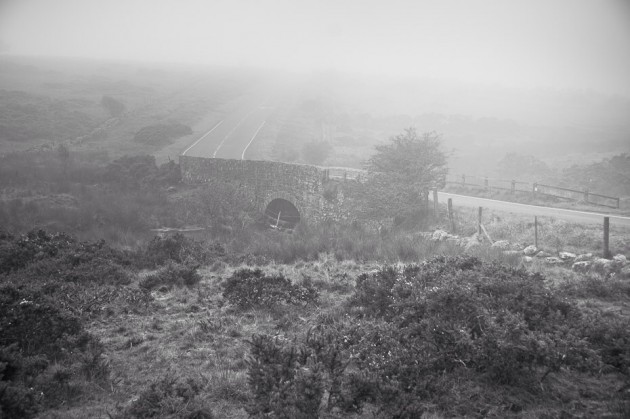 The road in question is the little travelled B3212 near Two Bridges. To this day, it remains one of the most mysterious places in England, and has been the scene for one of the most frightening hauntings in Dartmoor.

The hauntings have been named “the phantom hairy hands” and the entity has repeatedly tried and managed to push people of the road.

There was a death on this road in June 1921, a medical officer who worked in Dartmoor Prison was riding his motorcycle along the B3212 with his children in the side car. As he was coming up to the bridge that passes over the East Dart he shouted to his children to jump clear from the motorcycle. They managed to get clear as the bike went out of control and crashed killing the medical officer. It is claimed his hands became severed in the crash.

The mysterious hauntings started just after the time of this accident.

A little over a year later the first reported hairy hand incident occurred when a man crashed in exactly the same spot.

He claimed that a rough hairy pair of hands had closed around his and forced him to drive off the road.

The hands are alive

There have been several more stories over the years, but the one that is most often quoted is of the young married couple who were sleeping in a caravan nearby in 1924. During the night the young woman awoke with the feeling of terror and danger only to see a pair of hairy hands clawing their way up a partly open window. She made a holy sign and prayed and the hands slipped out of view.

It seems that the area had been avoided even before cars and motorbikes were common on the road, and there is a long tradition of supernatural creatures haunting the moorland. Local legend claims a woman, burned as a witch at the site of the first crash, cursed “this spot and all who pass here here”

The B3212 runs from Yelverton Northeast across Dartmoor to Sloncombe. Travel it at your own risk!