The Panxian Dadong Caves are known to have housed humans 300,000 years ago. It is also known that large animals inhabited the vicinity of the caves as well. Scientists, however, were extremely surprised to find prehistoric deposits indicating massive stegodons and rhinoceros also lived, or at least died, inside the caves. They found this very strange, seeing as how the caves are 1,600 meters (5,250 ft) above sea level.

Paleoanthropologist Lynne Schepartz stated how rare is is to find animals in a cave that don’t typically live in them. She believed that stegodons and rhinos were very unlikely to simply wander into the cave. Rhinos, in particular, are solitary animals that graze on their own. And yet, here lie their remains.

One theory involves carnivorous animals killing the mammals and dragging them into the cave. The most likely answer, though, would be human intervention. Inspection of the bones showed that they were burnt and then pounded by what could only have been a tool made out of stone.

The last expedition to the cave took place in 1998. To date, no further progress has been made in determining just exactly how those large animals got into the cave at all.

The Panxian Dadong is a Paleolithic karst cavern located in a small valley 1630 m above sea level on the western Guizhou Plateau, Southern China.

Humans were present at Panxian Dadong Cave about 300,000 years ago and so were also gigantic animals.

But scientists are baffled over how these animals could reach a mountain cave located over 1600m above sea level!

In Panxian cave lived one of Asia’s earliest human populations. Large deposits up to 19 meters deep contribute with satisfactory evidence of that.

Prehistoric deposits analyzed in the Panxian Dadong Cave indicate that such animals as elephant-like Stegodons and lumbering Rhinoceros lived there.

There has been found a large number of remains which belong to these large animals. The Panxian Dadong, (the name “Dadong” means “grand”), revealed a complete deposit of the Middle Pleistocene period.

Over 30 percent of the large animal remains constitute teeth and approximately 2 percent of remains are related to their skulls. 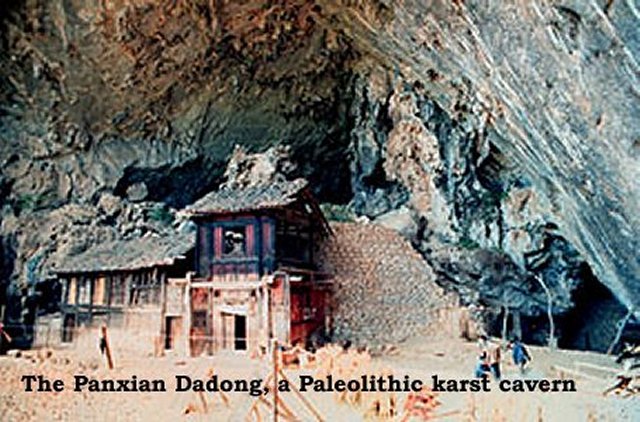 Mostly all those teeth come from very large animals like buffalos, Rhinoceros and Stegodons.

The cave is the central cavern of three stacked caves extending into a hillside. The central cave, 220 meters deep, covers 8000 square meters.

Test excavations showed that humans used the cave over a long period of time. The uranium-lead dating technique gave indications that the deposits are at least 300,000 years old, and they may go back as far as 700,000 years ago.

The Panxian Dadong Cave system, where digging unearthed a fossilized human tooth, may hold some important answers in this matter.

Some years ago, an expedition to Guangxi province (neighboring province to that of Guizhou), in Southeast Asia established that Gigantopithecus blackii, a large ape, 10 feet tall (3 meters) and weighing about 1,200 pounds (544 kg), lived at the same time as early humans for over a million years. 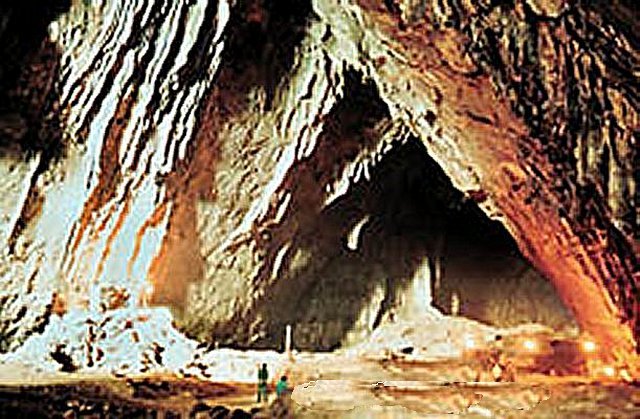 Archaeological material found in Guangxi caves in form of fossils of humans and Gigantopithecus blackii supports the theory.

The Panxian Dadong is only one of many caves of China and Tibet. Thousands of others, very old and with a great variety of shapes hosted rather prehistoric people than animals.

Both China and Tibet have numerous secret caves. Many of them, created by people rather than natural processes, have symbolic and sacred meaning.