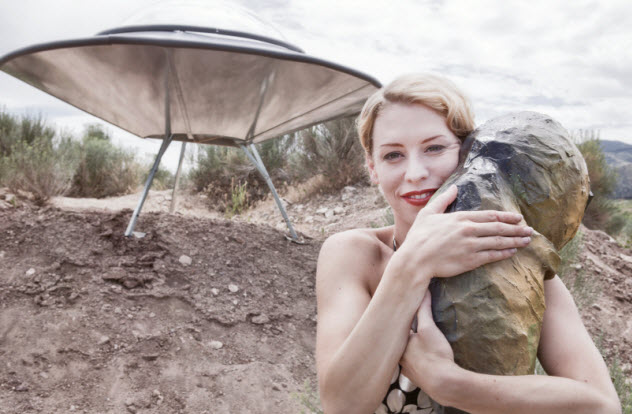 According to UFOlogist and author Carl Nagaitis, a businesswoman from Cheshire, England, with the pseudonym “Suzanne Brown” claimed that she was visited repeatedly by an alien called Myriko from 1965 to 1989.

Myriko was 150 centimeters (5′) tall with shoulder-length, blond hair and a skintight jumpsuit. The first encounters took place when Brown was only 12 years old, which she described as relaxed and loving. These encounters continued for years, and Brown reported visiting the inside of a spaceship once and seeing small, gray, ageless infants.

After the breakdown of her earthly marriage, Brown’s relationship with Myriko took a sinister turn. He used mind control to force her into sexual encounters with a vagrant and a prostitute. She described the experience as a nightmare that was real.

One month later, she discovered that she was pregnant. After another month, she awoke in the night feeling terrible abdominal pains. Myriko was in the room with her. He told her not to worry, that his people were simply taking what was theirs.

She passed out and awoke in a bed of blood, having possibly suffered a miscarriage. Months later, Myriko returned and took her to the spaceship nursery to show her a gray infant. “Somehow I knew that thing had come from my body,” said Brown. “I also knew that it had been removed from inside my body in the night of Myriko’s last visit.”

The visits from Myriko stopped entirely after Brown went through menopause.