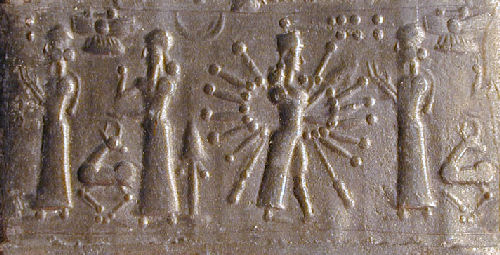 Ancient Sumerian texts define the Anunnaki as “those who from heaven to Earth came” described as those who descended from the heavens, and in certain context, the fallen angels. By comparative religions, its believed the book of Genesis (600BC) was extracted from the Sumerian Epic of Creation (~6000-8500BC). Records are filled with great details of Anunnaki having depictions as the watchers, also evident in further Biblical texts by Daniel and Jubilees.

According to the accounts, the Anunnaki were the Gods & Goddesses who met occasionally to indirectly determine the fate of mankind, if by no fault of their own. Abraham’s father Terah was believed to have served the fallen angels, or the sons of the gods/goddesses, found in Psalms in reference to the Nephilim. Sharing part of the Babylonian creation myth as the children of Anu and Ki, the Anunnaki are also associated with the stories of Planet X, or the 12th planet, and its return to Earth over a long elliptical orbit, written about by Zecharia Sitchin.