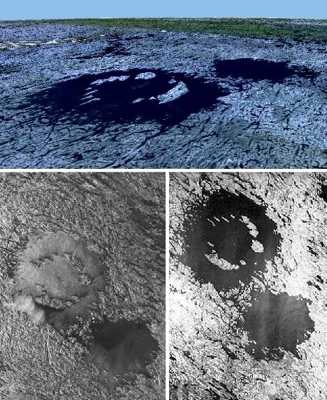 Wilkes Land is a large district of land in eastern Antarctica that was named after Lieutenant Charles Wilkes, who commanded the 1838 United States Exploring Expedition. During the expedition, Wilkes discovered proof that Antarctica is a continent. In 1962, a man named R.A. Schmidt became the first person to propose the theory that a giant impact crater is located beneath the Wilkes Land ice sheet. He based the hypothesis on seismic and gravity anomalies in the area. In 2006, a team of researchers led by Ralph von Frese and Laramie Potts used gravity measurements by NASA’s GRACE satellites to prove that there is a 480 km (300 mi) wide Wilkes Land crater. The enormous crater is centered at 70°S 120°E and was probably formed about 250 million years ago.

The anomaly is centered within a larger ring structure that is visible with radar images. If the feature is an impact crater, then, based on the size of the ring structure, the crater would be four or five times wider than the one that is thought to have caused the Cretaceous–Paleogene extinction event. The impact of the object has also been reported to have disturbed the rift valley that formed 100 million years ago when Australia moved away from the Gondwana supercontinent. For this reason, it has been hypothesized that the impact might have contributed to the massive separation by weakening the crust.

The dates surrounding the Wilkes Land Crater suggest that it might be associated with the Permian-Triassic extinction event, which occurred 250 million years ago and is believed to be the largest extinction event since the origin of complex life. People who doubt the impact theory have noted that there is a lack of an impact ejecta layer associated with the crater. In 2012, it was announced that samples taken from the core of Wilkes Land showed a tropical presence. Researchers were able to reconstruct the local vegetation on Antarctica and found that there were tropical and subtropical rainforests covering the coastal region 52 million years ago. The scientific evaluations showed that winter temperatures on the Wilkes Land coast were warmer than 50 degrees Fahrenheit approximately fifty million years ago.