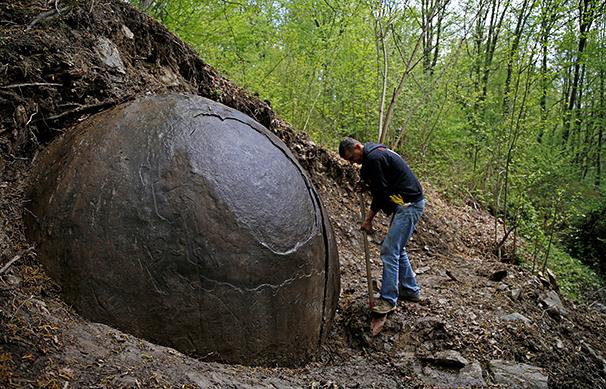 The huge spherical stone which was discovered last month in the Podubravlje forest in Bosnia is puzzling the scientific community.

The half-buried stone ball was found by Bosnian archaeologist Sam Osmanagich. According to estimates, it weighs about 30 tons and measures up to 1.5 metres in diameter. Its brown-reddish colour suggests it is partly composed of iron, but analysis has yet to be done.

Are these Alien artifacts?

For the archaeologist, this means “it would be further proof that southern Europe, the Balkans and Bosnia in particular, were home to advanced civilisations from the distant past and we have no written records about them.” This sphere could tell us more about this elusive civilisation. “They had high technology, different than ours. Finally, they knew the power of geometrical shapes, because the sphere is one of the most powerful shapes along with pyramidal and conical shapes. No wonder, that pyramids and tumulus phenomena can also be found in Bosnia.”

Osmanagich says he has been researching stone ball phenomenon for 15 years, including granite stone balls in southern Costa Rica and volcanic stone spheres in western Mexico and Easter Island, according to news.com.au.

Workmen hacking and burning their way through the dense jungle of Costa Rica to clear an area for banana plantations in the 1930s stumbled upon some incredible objects: dozens of stone balls, many of which were perfectly spherical. They varied in size from as small as a tennis ball to an astonishing 8 feet in diameter and weighing 16 tons! Although the great stone balls are clearly man-made, it is unknown who made them, for what purpose and, most puzzling, how they achieved such spherical precision.

Recent tests have still failed to provide evidence on how the giant balls were made, and most puzzeling of all, the source of the stone is still unexplained.  The best theory so far is that each ball represents a planet from a distant solar system,  a map from aliens??