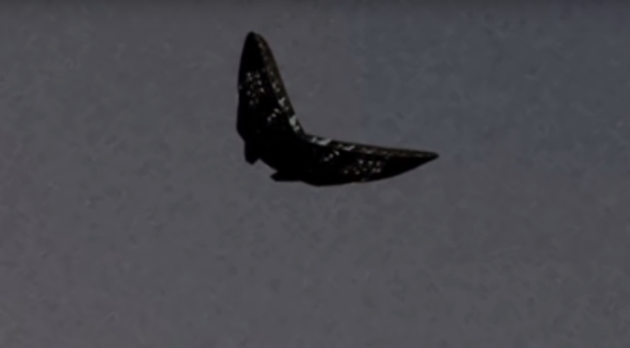 The object resembles the shape of a large winged insect.
Footage and images have emerged of a ‘metal butterfly’ that was spotted by a father and son in the US.

One of the most unique sightings to have been reported in a while, the bizarre looking object appeared in the sky as the two men – Tom and Christopher – were leaving a local restaurant.

Grabbing their phones they managed to record several seconds of footage and a series of photographs showing the butterfly-like craft moving overhead and off in to the distance.

Tyler Glockner, who has been hosting the video on his paranormal-themed YouTube channel ‘SecureTeam’, is adamant that the object is not something that could have been built by humans.

“The reason I am calling this an alien craft rather than just a UFO…is in the stunning detail, where we can see the true structural characteristics of this ship,” he said.

“And guys you take a look and tell me with a straight face this has anything to do with humans.”

Others however are not quite so convinced. UFO researcher and author Nigel Watson believes that the object in the video could have easily been created using computer graphics software.

“It looks like it was produced using a model and CGI,” he said. “It is a very distinctive looking object, it reminds me of the Millennium Falcon spacecraft in the Star Wars films with a bite taken out of it.”