In south Mumbai’s red light districts there are an estimated 100,000 brothel-based sex workers. Most of them are not there voluntarily. A high proportion of the women and girls have been sold into sex work, often by a relative or a trusted family friend; others are born into it.

Life within the red light districts is incredibly difficult. Poverty, drug and alcohol addiction, gambling and violence are an everyday reality. These women live on the edge of society, frowned upon and ignored. It is estimated that between 30 and 50 percent of India’s sex workers are HIV positive. Due to a lack of education and severe poverty, many of them continue to have unprotected sex.

In November 2007 I began my photo-essay on a group of sex workers based in south Mumbai, who work with SAI – a small NGO – on the Didi (Sister) Project. The women take what they learn about HIV, STIs and human rights back to their communities, and teach others about the importance of condoms and HIV testing. They feel empowered, with a new-found sense of self-respect as well as respect within the community. It has given some of them a reason to live, a purpose.

After getting to know some of the women I wanted to make my project more personal, to tell their stories as a sister, a mother, a daughter – as a woman, not just a sex worker. I have been working on images that portray intimacy, femininity and tenderness as well as showing the often-brutal reality of life within the brothels. I want the viewer to feel they can understand these women and gain an insight into their lives, rather than presenting them with another generic set of sex pictures.

Hajra is HIV positive and severely scarred after being set alight with a kerosene lamp. She is also generous, strong, determined and has an amazing sense of humour. Jyoti is 19 and lives in her mother’s brothel. Like most teenagers, Jyoti loves music and make-up.She would like to be a policewoman so that she can help women like her sister and mother, but she did not finish her education.

Sex workers continue to live in squalid conditions, isolated from the rest of society – trapped in a life of poverty and often slavery, from which, for many, there is no escape. 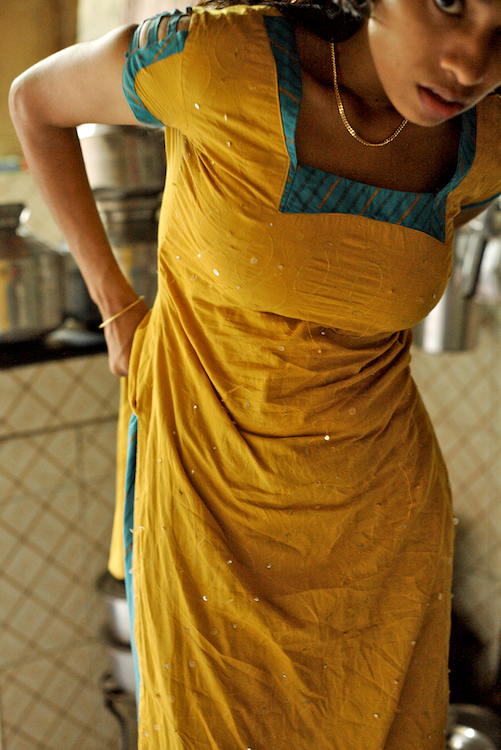 “When I was 13 I came to Bombay, to Faulkland Road. I used to live in Chennai with my grandmother, but my parents lived in Mumbai. My mother brought me to Bombay by force and married me to a man. He was about 30. A violent person. I tried to escape from this husband. I wanted to go back to Chennai, so I escaped.

But when I got to Victoria Terminus train station I met a girl who promised to get me a job in Bombay. She told me not to go back to my village. But she tricked me. She sold me to a brothel in Falkland Road. She got about 20,000 rupees for me. My mother wouldn’t help me. She disowned me because she said I was already married. I’ve been in Falkland Road ever since.

I have scars where I was beaten as a young girl in the brothel. I used to refuse to sleep with the men, so they forced me. They raped me, beat me and burned me with cigarettes. When I was younger I used to see 30 or 40 clients every day. I would get 10 rupees each time.

After one month a man came who paid 20,000 rupees to take me out of the brothel. He was in his twenties. I was married to him and we had two daughters. But after about three years he changed, and started beating me and my daughters. They were only toddlers.

He forced me to be a sex worker again. I refused but he cut me with a knife. He cut all my hair off too. So I started again. I would earn 2,000 or 3,000 rupees a day, and I had to give it to my husband. He spent it drinking, smoking and gambling. He was very jealous and accused me of giving the money to another man if I did not earn any money that day.

He used to beat my eldest daughter. He threatened to send her to the brothels too when she started to grow up. Once, I came home and caught him beating her. I fought with him but he poured a lamp over me and set me on fire [she points to another scar on her stomach]. I had to jump into the mud in the lane from the balcony to put the fire out. It was only the first floor.

Eventually I stood up to him and I reported him to the police. I did it because I didn’t want my daughters to have the same life.

Then I met uncle Devraj, who works for Bombay Teen Challenge. They took my girls into their hostel. They went to school there and could stay for free. I went back to Falkland Road so I could eat and live.

Later, when I was 28, I met another man, Ahmed. He was kind to me and good. He worked for [the NGO] SAI, which is how I know about it. We got married and he was so lovely to me. But he died from AIDS about four or five years ago, and now I am HIV positive from him.

When I was young, I used to see so many more clients and they paid me ten rupees. Now I only see ten or 15, and they pay me 300 or 400 rupees. But when I get a foreigner – American or British – they pay me 1000 rupees and they take me to a hotel. I have had many foreign clients. I’ve actually got one this week. They’re usually regulars.

Maybe eight or nine of my clients every day are regulars. I will not see clients who are drunk or abusive or on drugs. They are from all walks of life: family men, business men. I don’t tell any of them I’m HIV positive, otherwise I wouldn’t get any work at all. But I always say they have to use a condom.

I pay 50 rupees per day for my pinjara [room] in the brothel. We have a family room and no-one has sex in the family room. The other sex workers are like a family, we help each other. But the government doesn’t help at all.

My daughters are now 19 and 15. The eldest is about to go to America to study missionary work, sponsored by Bombay Teen Challenge. My youngest is studying so she can become an air hostess. I am really proud that my daughters are not prostitutes. They are doing so well.

I would like to ask the government to provide a room and a job for sex workers and their children. They need to be educated. They need to be trained to do something else, so they can leave the brothel.” 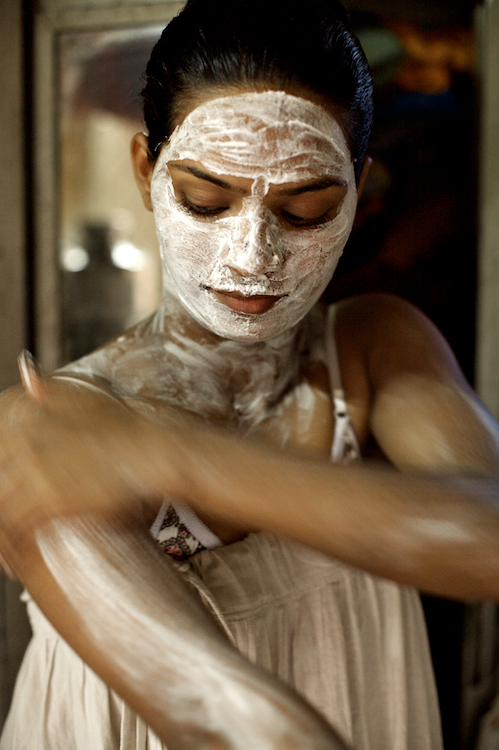 “I grew up in Mumbai, and living here I have seen the hard and horrible life. This life is nothing, a waste of a life. We do all this for very little money, just to survive. I am Devdesi [a woman sold to a religious institution as a prostitute], so I cannot marry. But I wanted to do something to help others, to help my sisters. So I found out about SAI, went to their van and asked about working with them. Now I work as a community volunteer. I am getting respect in society, and I’m saving lives of others by teaching the risks of HIV and STIs.

When I was young I wanted to be a doctor or a police woman, because these jobs are respectable. But my mother became ill and there were financial problems at home, so my sister had to work as a prostitute. Then my mother made me a prostitute too, when I was 14, and I had to stop my studies. I had to do all the work in the house because my mother was bedridden, and my sister was out all day and night. When I started working in the same hotel as my sister, she showed me what to do.

Now, if I get the opportunity to study, I would still like to be a police woman. My childhood dream is still my dream. I know all the horrors you face in the red light areas. If I was a police woman I could help them. I could also marry, and have children and a normal life. Even if I died, my children would be looked after and they would never have to enter this life. I am not working as a sex worker anymore, and I never ever want to go back to it again.” 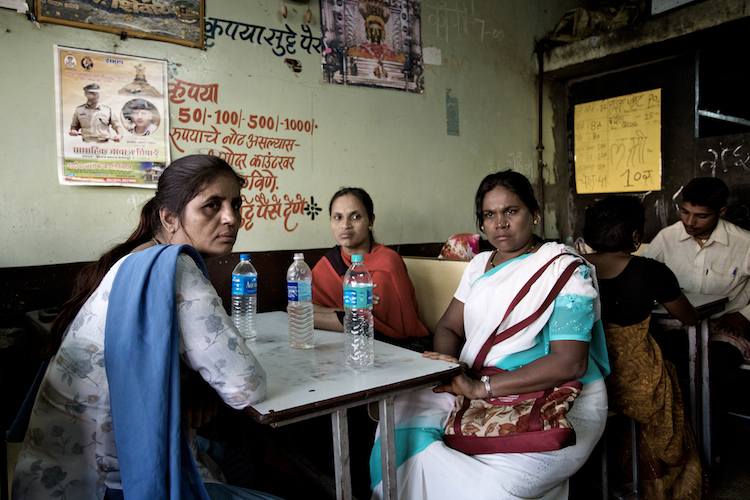 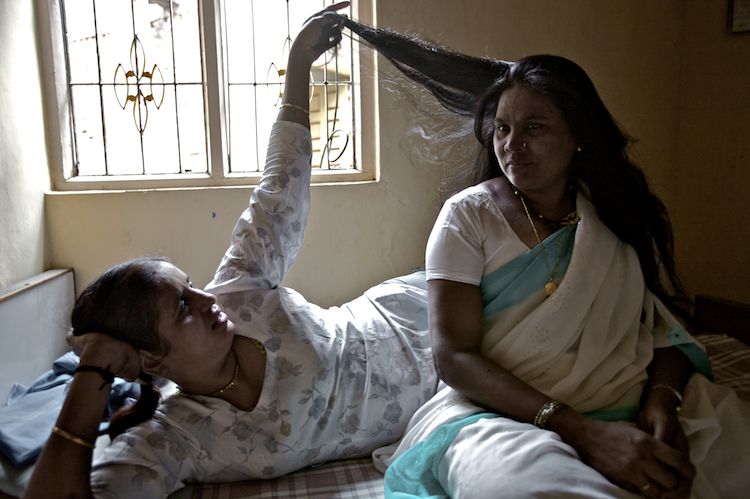