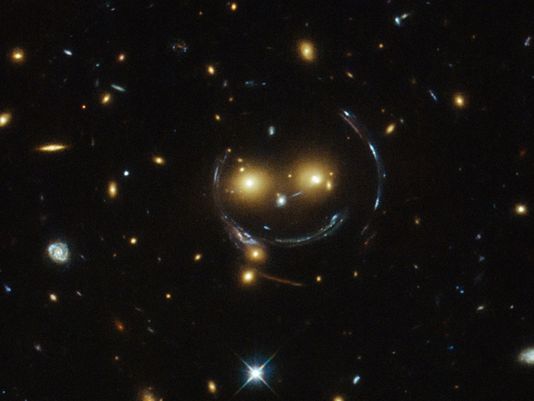 The image shows the galaxy cluster known as SDSS J1038+4849.
The Hubble Space Telescope has managed to photograph a rather jovial looking galaxy cluster.

The impressive image, which shows a distant group of galaxies, bears an uncanny resemblance to a smiling human face.

1. It was named for a famous astronomer.
The Hubble Space Telescope takes its name from Edwin Hubble, an American astronomer whose observations helped broaden scientists’ view of the universe to include galaxies other than our own. While working at the Mount Wilson Observatory in 1923, Hubble determined that Andromeda—then considered a nebula—was actually a separate galaxy hundreds of thousands of light years away from our Milky Way. He made another groundbreaking discovery in 1929, when he helped quash the “static universe” theory by finding evidence that galaxies move away from one another at a constant rate. Hubble died in 1953, but the telescope that bears his name has since confirmed and fine-tuned many of his theories.

2. The telescope was several decades in the making.
Hubble’s early origins date back as far as 1946—more than 10 years before NASA was established. That was the year that astrophysicist Lyman Spitzer Jr. penned an influential paper discussing the merits of a space-based observatory. In it, he argued that an in-orbit telescope could view the heavens unhindered by the Earth’s atmosphere, which can blur images. Spitzer was later instrumental in developing the Orbital Astronomical Observatories, four unmanned satellites that NASA launched between 1966 and 1972, and he tirelessly lobbied the government to create a bigger and better space telescope. The project’s massive costs proved a major stumbling block, however, and it wasn’t until 1977 that the U.S. Congress finally appropriated funding for what would become Hubble.

3. The launch was delayed by the Challenger disaster.
The fledgling Hubble program suffered a massive blow in 1986, after the space shuttle Challenger exploded during liftoff, killing seven astronauts. NASA grounded its space fleet in the wake of the tragedy, leaving Hubble—which depended on the shuttle for its transport and maintenance—without a ride into orbit. Scientists made good use of the delay by upgrading the sensitivity of the telescope’s instruments and refining its ground control software, but the added years of servicing and storage in a high tech clean room sent costs soaring. By the time the space shuttle Discovery finally lifted off in 1990 with Hubble tucked into its cargo bay, the project was seven years behind schedule and more than $1 billion over budget.

Each of the points on the face, including the two bright orange eyes and its white button nose, are individual galaxies, while its smiling expression and overall circular shape are the result of strong gravitational lensing, a phenomenon in which the light behind the cluster is magnified and distorted by its powerful gravitational pull.

“In this special case of gravitational lensing, a ring – known as an Einstein Ring – is produced from this bending of light, a consequence of the exact and symmetrical alignment of the source, lens and observer and resulting in the ring-like structure we see here,” NASA wrote on its website.