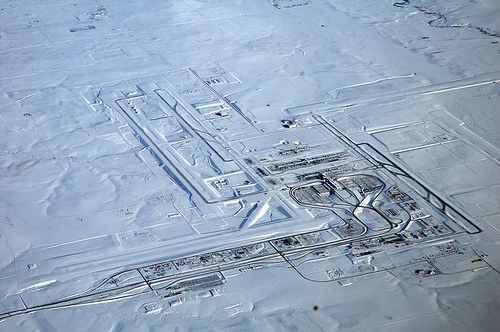 It seems that nearly every government has its secrets. Most of these secrets involve the military; whether it is weapons development, defense research, or the facilities themselves.

In a small town on the coast of the Black Sea lies a massive secret military base.
The tiny town of Balaklava, located on Balaklava Bay in the Ukraine, is the home of a massive underground submarine base that dates back to the Cold War. The complex was constructed in 1957 and includes an armory, a channel, a submarine repair center, and nuclear shelter large enough to shelter 3000 people.

The base continued operations even after the Cold War was over, but was shut down in 1995. Today the Balaklava Submarine base is operated has a museum that provides a rare look into such a secret past.

Once Part of the Soviet Union, Latvia contained many Soviet military installations and thousands of Soviet troops were stationed throughout the country.

When the Cold war ended and a mass nuclear disarmament was called for, many of those installations become abandoned. Once such facility is located near Lecava, Latvia. The abandoned military base is the site of four missile silos, a central command center, and technical support bunker.

According to the Federation of American Scientists, “The R-12 was the first Soviet strategic missile using storable propellants and a completely autonomous inertial guidance system.

With its capability to deliver a megaton-class nuclear warhead the rocket provided a capability to attack strategic targets at medium ranges.”

A massive underground facility is said to exist in the Ural Mountains on Yamantau Mountain, near city of Mezhgorye. Though the actual size of the facility is unknown, it is rumored to span more than 400 square miles.

The American government became aware of the complex in 1992 and the New York Times ran a story on it in 1996. (3) Officials believe it took nearly 10,000 workers to complete the complex that is actually made up of three separate facilities.

Many believe that construction of the site began in the 1970s and was used as a repository for Russian treasures, food storage area, and a nuclear bunker for military officials.

Six miles from Moscow, deep beneath the town of Ramenki, lays an emergency bunker for Russian leaders and their families.

The bunker, which is often better described as an underground town, has the ability to provide shelter for 15,000 people in an area of about 500 acres for 30 years.

It is rumored that it is connected to the Metro-2, a secret underground rail system built by Joseph Stalin that connects the underground city to the Kremlin and the government airport. However, the existence of this railway system is neither confirmed nor denied by the Russian government.

Of course, no list of secret underground Russian military bases would be complete with at least a mention of Zhitkur.

Touted as Russia’s area 51, this base is rumored to be beneath Kapustin Yar, a Russian rocket research laboratory and launch site in Astrakhan Oblast.

This facility always makes the list of secret facilities in UFO and Conspiracy circles as a place where “advanced technologies” are retrofitted to current Earth technology, but (to date) the existence of this facility has not been confirmed.

There is no doubt that the former Soviet Union and modern-day Russia has a long list of underground military facilities.