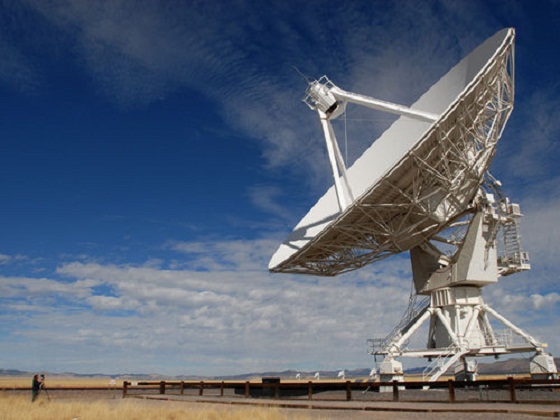 An Iranian news agency alleges that documents provided by former National Security Agency (NSA) contractor Edward Snowden prove that “an alien/extraterrestrial intelligence agenda is driving US domestic and international policy, and has been doing so since at least 1945.” 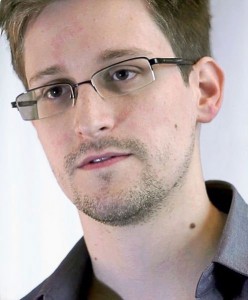 The Fars News Agency asserts that the shadow alien government running the United States is based in Nevada, and these aliens previously ran Nazi Germany. TheWashington Post reports, “As proof that aliens were secretly behind the Nazis, the report explains that Germany built hundreds of submarines toward the end of the war, far more than would have been possible with mere human technology.” But the Post continues, “It does not explain why aliens with access to interstellar travel built subs that were so grossly incapable against the British navy, or why all-powerful extraterrestrials were unable to help the Nazis resist an invasion by Allied forces that are mere cavemen relative to their own technology. So far, these are pretty unimpressive aliens.”

It was apparently after losing the war that these aliens established themselves as the secret controllers of the United States government.

Fars News claims that Snowden provided documents proving these allegations to Russia’s Federal Security Service (FSB). And Fars News further asserts that the claims were recently confirmed by Canada’s former minister of defence Paul Hellyer. The news agency alleges that Hellyer was given access to all of Snowden’s documents by FSB and he confirmed their accuracy. It was reportedly shortly after this that he appeared on Russia Today’s program SophieCo where he announced that aliens have visited Earth for thousands of years, and that several are working with the U.S. Air Force in Nevada.

But Hellyer’s statements on SophieCo are hardly confirmation of recently seen documents acquired by FSB from Edward Snowden. Hellyer has been outspoken about his extraterrestrial beliefs for years. He even spoke about these same issues at the 2013 Citizen Hearing on Disclosure at the National Press Club in Washington, DC. 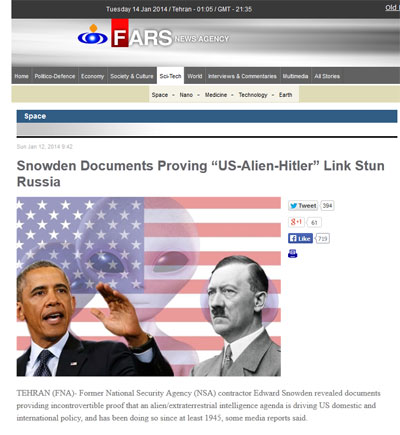 According to Fars News, Russian authorities are most concerned about the “confirmation” that extraterrestrials controlling the U.S., known as the “Tall Whites,” are the same extraterrestrial race behind Nazi Germany’s rise to power during the 1930s.

As the Washington Post points out, “Iran’s semi-official news outlets have something of a reputation for taking conspiracy theorism to the next level.” The only source Fars News Agencycites to support these incredible claims is conspiracy website Whatdoesitmean.com.

The story on the Fars website. (Credit: Fars News Agency)