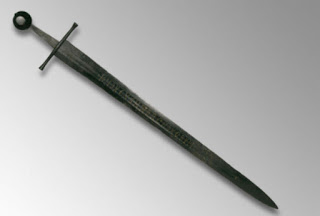 A sword found in Lincolsnhire’s River Witham in 1825 bears a peculiar inscription that nobody can read.

The medieval sword, which has been linked to the magna carta, bears a striking resemblance to the weapons depicted in artwork of the French invasion of Normandy in 1203.

Its blade also features a strange inscription that to date nobody has been able to decipher.

The inscription on the blade reads +NDXOXCHWDRGHDXORVI+.
“An intriguing feature of this sword is an as yet indecipherable inscription, found along one of its edges and inlaid in gold wire,” wrote British Library curator Julian Harrison.

“It has been speculated that this is a religious invocation, since the language is unknown.”

Researchers are now hoping that by releasing the details of the sword’s mysterious lettering online someone will be able to come forward and solve this age-old mystery once and for all.

Via lincolnshireecho.co.uk by East Lindsey Target

A medieval sword linked to the Magna Carta is causing a bit of a mystery for historians at the British Library.

Researchers are appealing for help to deceiver the inscription on the sword which was found in the River Witham in July 1825.

According to a blog by curator Julian Harrison the sword was presented to the Royal Archaeological Institute by the registrar to the Bishop of Lincoln.

Mr Harrison says in his blog: “An intriguing feature of this sword is an as yet indecipherable inscription, found along one of its edges and inlaid in gold wire.

“It has been speculated that this is a religious invocation, since the language is unknown.”

The inscription seems to read +NDXOXCHWDRGHDXORVI+

The sword is on loan to the British Library from the British Museum as part of the Magna Carta: Law, Liberty, Legacy which runs until September 1.

If struck with sufficient force, it could easily have sliced a man’s head in two.

The sword is currently on display alongside a 14th-century manuscript of the Grandes chroniques de France next to a picture of the French invasion of Normandy in 1203 where men are wielding similar swords.

Marc van Hasselt from Utrecht University, Hastatus Heritage Consultancy, posted on the blog that the River Witham sword could be part of a large international family as inscribed swords were all the rage in Europe around the year 1200.

He said: “While researching a specific sword-blade found in Alphen aan den Rijn, the Netherlands, I found around a dozen other swords which had striking similarities.

“The swords themselves are of a high quality, but what most catches the eye are the inscriptions. Both their mysterious contents and the similarities in the lettering are striking. A sword from Sweden might use the same slightly curved X as the River Witham sword. A sword currently in Berlin has an I-S contraction also used on a sword found in the Netherlands.

“These similarities go so far as to suggest the same hand in making the inscriptions. However, their contents are still a mystery, regardless of their origins.”

He goes on to suggest a saint is being invoked on the River Witham sword in Latin.

He suggests the start of the River Witham inscription, ND, could be Nostrum Dominus (our Lord) or Nomine Dominin (name of the Lord) followed by XOX referring to the Holy Trinity.

He says in the blog: “By putting together pieces of the puzzle from all over Europe, we might come a little bit closer to solving the mystery. And even if we cannot decipher the inscriptions completely, they might bring us a little closer to understanding our ancestors.”