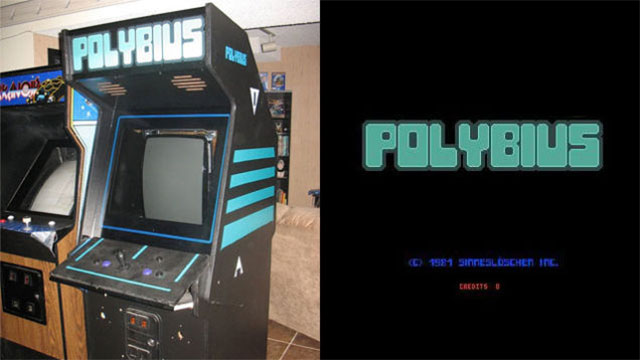 The legend of the mysterious arcade game

Polybius is an arcade game which is said to have induced various psychological effects on players. The story describes players suffering from amnesia, night terrors, and a tendency to stop playing all video games. Around a month after its supposed release in 1981, Polybius is said to have disappeared without a trace. There is now no evidence that such a game has ever existed – but hundreds of gamers have reported playing the game in the past.

The first documented reference to the game was an anonymously authored entry added to the site coinop.org on August 3, 1998.

The entry mentions the name Polybius and a copyright date of 1981. The author of the entry claims in the description to be in possession of a ROM image of the game, and to have extracted fragments of text from it, including “© 1981 Sinneslöschen”.

The remainder of the information about the game is listed as “unknown”,and its “About the game” section describes the “bizarre rumours” that make up the legend.

The latest urban legends about the game describes how the machines were visited by men in black, who collected unknown data from the machines – for unknown reasons.

Related to the mystery is the true story of the FBI raids on arcades in Portland sometime in 1981. The raids took place where the owners were suspected of using the machines for gambling, and the lead-up to the raid involved FBI agents monitoring arcade cabinets for signs of tampering and recording high scores.

During the raids a number of arcade machines did get removed – but the FBI now claims they took no Polybius machines. Arcade owners claimed otherwise!

More recently in China, retro cabinet Polybius games have been spotted listed on online auctions – but both the sellers and buyers have since vanished!