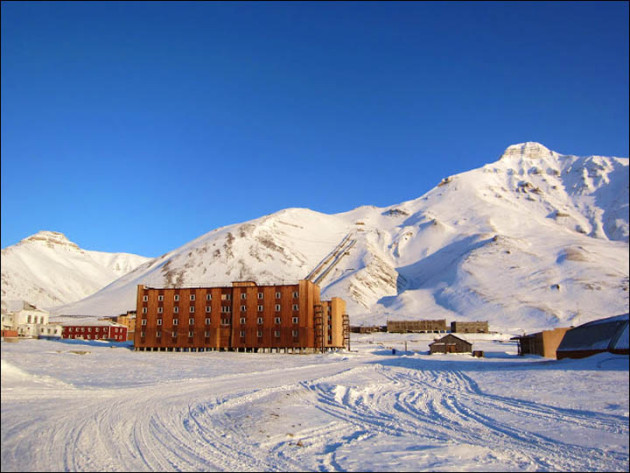 Pyramid is literally frozen in time, captured on camera by Vladimir Prokofiev.
. An anomaly, it is a deserted Soviet town that is in fact in Norway, just 1300 km from the North Pole. And no, it is not in Siberia, but we liked the Arctic pictures and ice-scapes which highlight a spirit of conquering the cold which is a Siberian quality; indeed among the people who came to work here were many from Siberia. This old mining outpost, called Pyramid and abandoned in 1998, is on the Arctic Ocean island of Spitsbergen

‘Welcome to the very end of the earth,’ said Vladimir, whose amazing images capture a lost Soviet world which is now becoming a tourist attraction for intrepid travellers to this remote outpost. He took the images when he worked here as a guide for the mainly Western tourists in spring.

‘The sun has been shining since 4-30am. Soon it will start shining 24/7’, said Vladimir. He regularly visits the one place in Pyramid where, on a good day, he might be lucky to catch a signal for his mobile from Norwegian settlements on Spitsbergen.

‘There are no radio, TV, Internet in the village. However we can try to catch a signal from Norway in the so-called ’emotional spot’ or ‘spot of hope’,’ he said. 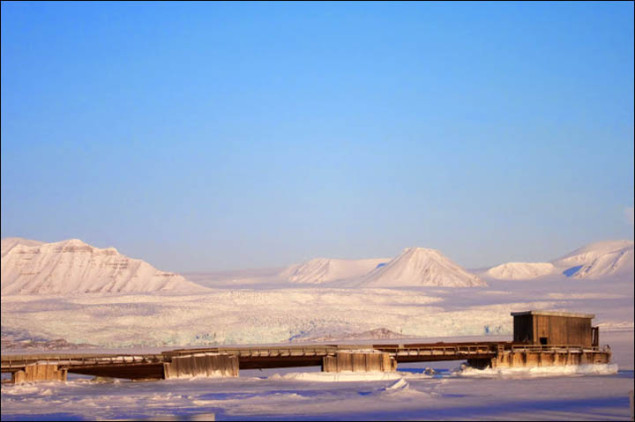 It is fraught with problems trying to stay in contact with loved ones.

‘The battery runs down before the fingers get frozen, you can never know which one will give up first – your fingers or a battery of your mobile’, he explained. He visits a disused gym in a wooden building known to the Soviets as ‘London’. It housed unmarried men when the community was a thriving settlement. The bigger house to the right was called ‘Paris’, it was inhabited by single women.

There is a canteen between the two houses, probably to give a chance the unattached to meet’.

The thermometer reads minus 10C in the sun but Vladimir calls this ‘optimistic’ since it feels cooler with the wind chill. In a garage he funds a 22 year old Toyota, called a ‘limo’ by the Norwegian visitors. A sign commemorates Yuri Gagarin’s trip to space in April 1961, and while the town was abandoned seven years after the fall of the Red flag, everything about it has the stamp of Soviet Communism about it.

The ghost town, which once boasted 1,000 people, is reputed to maintain the world’s most northern grand piano in the cultural centre.

‘It used to be a Soviet paradise in the 1970s and 1980s with a nursery, a school, a sports and entertainment centre, a warm swimming pool covered with a roof made of Karelia birch’, said a report on Vesti-Yamal TV in Russia.

‘Soil with special freeze-resistant grass was brought here by plane from ‘the big land’. This grass still grows here. But all the people have left. The last tone of coal was lifted on 31 March 1998′.

This TV report accused early tourists of looting the town – ‘they took away all they could carry’, including library books and parquet flooring.

Now, though, the buildings have been secured and lighting restored, with a view to increasing the number of tourists visiting Pyramid. A threat is polar bears. ‘They enjoy coming into the village and checking rubbish bins’, said the TV report, stressing the guides in the village monitor their movements.