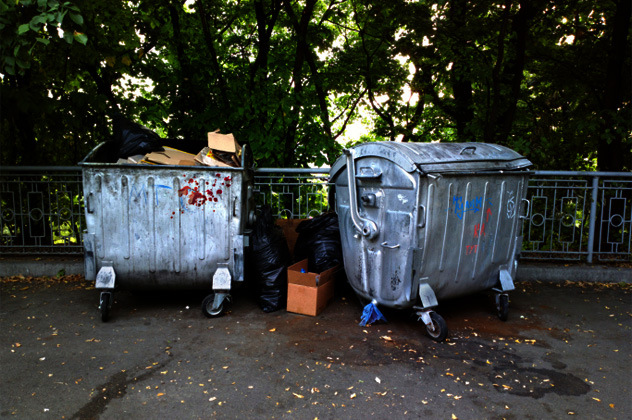 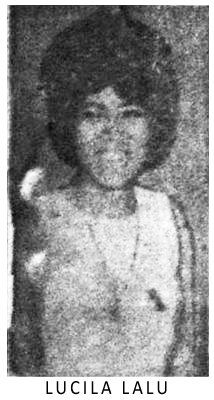 Lucila Lalu left Barrio Mapaniqui (Candaba, Pampanga) for Manila sometime in 1961. As with many others before her, it was the old search for a good life in the city. In Manila, she secured a police clearance to work as a waitress and was promptly hired by one of the city’s small-time night spots. Not long after, she met a patrolman, Aniano Vera, a married man with whom she, nevertheless, decided to live in common-law marriage. The relationship produced a son, and her job, some savings which eventually enabled her to buy out the owners of the Pagoda Soda Fountain on Rizal Avenue, a cocktail lounge and restaurant rolled into one. Business was kind and busy, and she earned enough to establish another concern — a beauty parlor on Mayhaligue st., Sta. Cruz. The modest success bred, too, the indulgent side in her, and she took on a lover whom she set up in an apartment and then supported.At 28, Lucila spent most of her time and energy on these three main concerns of her life— business, family and love. If not with equal enthusiasm, at least with an apparent resolve not to give up any member of the triangle. And she was best of health and spirits.

Until one Sunday (May 28), or perhaps it was a Monday, late last month, when the hand of violence snuffed out her life and scattered her body in little pieces all over the city. First, her legs were found, chopped expertly into four pieces and wrapped in a newspaper dated May 14, 1967, in a garbage can on Malabon st., Sta. Cruz, about a stone’s throw from her cocktail lounge. A day later, her body, headless and legless, was found on a vacant lot along Epifanio de los Santos Avenue, just beyond the bend of Guadalupe Bridge in Makati. It took time, of course, to identify her in the little pieces, but the police managed somehow to get fingerprints off the dead hands which subsequently found to match those in a police clearance file on one Lucila Lalu.

Lucila, in death, hugged page one. Police investigators — in the hope of finding her head and, more important, her murderer — dug deep into her recent past. The arrest of the lover, 19-year-old Florante Relos, precipitated headlines such as “MPD solves murder of dismembered girl.” Relos had an airtight alibi, however, and he appeared to have he least of reasons for killing her. “She was good to me,” he told the police and admitted having had intimate relations with the victim. Happily for him, two friends corroborated his claim that he was somewhere else at the time of the murder — which was between late Sunday evening and Monday noon, according to the results of the autopsy.

Relos was freed, but he refused to leave police headquarters, “for fear of his life.” Suspicion shifted to the victim’s common-law husband Patrolman Vera. And again, people began saying, “The case is solved; Vera killed her in a fit of jealousy.” Relos testified that Pat. Vera had mauled him once in the Pagoda Soda Fountain when Vera found Lucila embracing him. But the police could not find any direct evidence connecting the patrolman to the crime, beyond an apparently strong motive.

As the case developed, the sordid side of Lucila’s life rather than her murderer surfaced. Reports poured in that Lucila had other lovers and the police responded by hunting them. The testimony of eager beavers in the case was varied and contradictory. Lucila’s neighbors claimed they saw three men dragging what looked like a body from Lucila’s residence. Vera claimed he saw Lucila hale and hearty hours after the neighbors “had seen” her body being dragged away. A friend of the victim stated that Lucila wanted to end her relationship with Relos, but Relos swears the woman was very much in love with him. And so on. And so forth. The police, for their part, theorized on the circumstances behind the murder. From what was left of Lucila, they surmised that the murder could only have been committed by someone familiar with the use of knives and such — say a butcher or a surgeon or at least a pre-med student. The killer must have used a private vehicle to dispose of the torso and legs, and because these were very cold to the touch when found, the remains, the police said, must have been stored in a freezer. These led to speculation that a wealthy man may have been involved in the case, in addition to the earlier and credible theory that the killer must be intelligent, methodical and some sort of professional.

After a week of investigating and prying for information, the police still had no murderer to show before the public. And the victim’s head still had to be recovered. This led not a few people to feel that local sleuths, be they Manila’s finest or our intelligence agents, are not fine enough. Given an intelligent murderer, one who is not an easy prey to passion and hence is not likely to be careless, a case can drag on unresolved, as in fact many have in the past.

June 15, 1967- Jose Luis Santiano, a 28-year old dental student surfaced and confessed to the crime. He recounted and detailed the events that led to the brutal killing. However, a few days later, he retracted and repudiated his confession and insisted on his innocence. But the authorities were firmed on their decision to pursue the case against the new suspect. New evidences uncovered pinpointed to Santiano.

Chop-chop. A term coined to describe what is done to easily and inconspicuously dispose of the remains of a murder victim. The term was first used in the Philippines when the dismembered body parts of Lucila Lalu were found in different cities in May of 1967.

After Lalu’s murder was discovered, four suspects surfaced, all said to be romantically linked to Lucila: a waiter, a dentistry student, a police officer and an executive in a printing firm unnamed by authorities.

Who is Lucila Lalu? Why was she killed? Why, after one of the suspects confessed to committing the crime, has the case remained an unsolved mystery almost 42 years after it happened?

Listen to Manila Mayor Alfredo Lim who was a Sergeant and the Head of the Manila Police Department’s Follow-up Group in charge of the investigation recount aspects of the case. And under the helm of Gawad CCP awardee indie director Sandino Magno, watch a recreation of how the crime was committed.