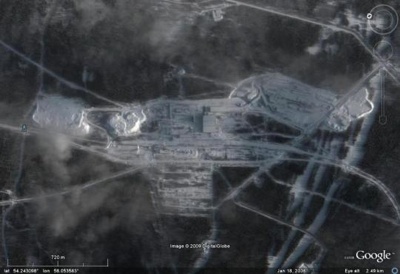 Mount Yamantaw is, at 5,381 feet, the tallest mountain in Russia’s southern Ural range is a source of secret. The U. S. government is on record as stating that it strongly believes in the existence of a massive stockpile of nuclear weapons hidden in this mountain. The Russians have built two “closed cities,” or permanent military installations with civilian populations, all of which are employed in work of a nuclear nature (similar to the Manhattan Project), just southeast of the mountain. You can find all of this on Google Earth.

The cities are named Beloretsk-15 and 16, and are believed to be built on top of a massive underground facility, which houses thousands of nuclear warheads. Russia has been questioned about this repeatedly by the U. S. government, and its explanations are absurdly inconsistent. Russia has, in various instances, said that it is a mining site, a repository for Russian treasures, a food storage area, and a bunker for leaders in case of nuclear war. Any of these is believable. Why haven’t they picked one and stuck to it?

On a diplomatic trip to Russia, former Congressman Curt Weldon (R-PA) asked about the mountain. “I went to Moscow and spoke with the deputy interior minister who was in charge of mining. I asked him if there was any mining activity there. He just shook his head and said he had never heard of it. So I mentioned the other name the Russians use for it: Mezhgorye. He said he hadn’t heard of that either. Then he sent an aide out to check. Twenty minutes later, the aide came back, visibly shaken. He said they couldn’t say anything about it.”

The conspiracy theory goes further, claiming that not only is the mountain hiding a stockpile of nukes, but that some or all of these nukes are connected to a gigantic supercomputer which cannot be turned off or altered in any way by anyone. The computer is programmed to detonate the nukes if it detects any nuclear warhead striking anywhere in Russia. These nukes have been surrounded by an extremely poisonous isotope of cobalt, rendering them a colossal “dirty bomb.”

The radioactive cloud would encircle Earth and blanket all land vegetation with radioactive cobalt, which would immediately kill all plant life, without which all animal life would die within a few months. This is popularly known as “the Doomsday Device.” If you’ve seen the film “Dr. Strangelove,” you’re familiar with it.

The scariest part of this theory is that the blanketing of any plant life with radioactive cobalt would truly kill the plant life, in which case it is feasible for the human race to destroy all land life. It is not known what would happen to ocean life, but it would probably be fairly unaffected. This does not mean that the human race can destroy the world. Earth will still be here. And given enough time, life would resume.

But the Doomsday Device is feasible, very easy, in fact, to manufacture.