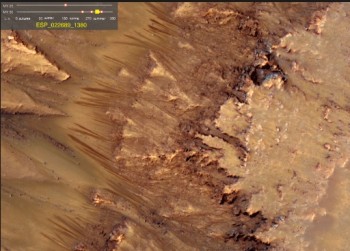 Mars is the fourth planet from the Sun and the second smallest planet in the Solar System, after Mercury. Named after the Roman god of war, it is often referred to as the “Red Planet” because the iron oxide prevalent on its surface gives it areddish appearance. Mars is a terrestrial planet with a thin atmosphere, having surface features reminiscent both of the impact craters of the Moon and the valleys, deserts, and polar ice caps of Earth.

Like Earth, Mars has differentiated into a dense metallic core overlaid by less dense materials.Current models of its interior imply a core region about 1,794 ± 65 kilometers (1,115 ± 40 mi) in radius, consisting primarily of iron and nickel with about 16–17% sulfur. This iron(II) sulfide core is thought to be twice as rich in lighter elements than Earth’s core. The core is surrounded by a silicate mantle that formed many of the tectonic and volcanic features on the planet, but it now appears to be dormant. Besides silicon and oxygen, the most abundant elements in the Martian crust are iron, magnesium,aluminum, calcium, and potassium. The average thickness of the planet’s crust is about 50 km (31 mi), with a maximum thickness of 125 km (78 mi). Earth’s crust, averaging 40 km (25 mi), is only one third as thick as Mars’s crust, relative to the sizes of the two planets. 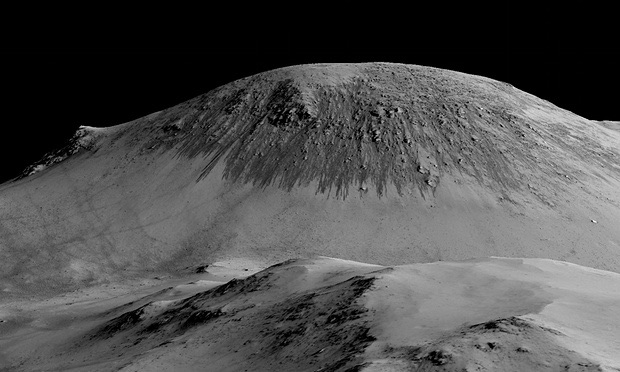 Liquid water runs down canyons and crater walls over the summer months on Mars, according to researchers who say the discovery raises the chances of being home to some form of life.

The trickles leave long, dark stains on the Martian terrain that can reach hundreds of metres downhill in the warmer months, before they dry up in the autumn as surface temperatures drop.

Images taken from the Mars orbit show cliffs, and the steep walls of valleys and craters, streaked with summertime flows that in the most active spots combine to form intricate fan-like patterns.

Scientists are unsure where the water comes from, but it may rise up from underground ice or salty aquifers, or condense out of the thin Martian atmosphere.

“There is liquid water today on the surface of Mars,” Michael Meyer, the lead scientist on Nasa’s Mars exploration programme, told the Guardian. “Because of this, we suspect that it is at least possible to have a habitable environment today.”