Could these formations have been created by alien life forms ?
Mysterious silica formations photographed in a Martian crater could represent evidence of alien life.

The cauliflower-like shapes, which are known as micro-digitate silica protrusions, were first discovered back in 2008 by NASA’s Spirit rover during its exploration of Mars’ Gusev crater.

Nobody knew how they had formed at the time, but now following new research conducted in the Chilean Desert, Steven Ruff and Jack Farmer of Arizona State University have put forward the possibility that the silica formations were actually created by microbes.

The idea is based on studies of similar patterns formed by microbial life on Earth – in particular in Chile’s Atacama desert where the conditions are very similar to those on mars.

The same type of formations have also been observed at Yellowstone National Park in Wyoming.

If it turns out that the patterns on Mars really were created by microbes then it means that these strange formations could be the first ever direct evidence of extraterrestrial life.

Ruling out geological interpretations however is going to be difficult.

“Only when something that we have identified as a potential biosignature is proven to have been produced only by life, and not by any abiotic means, can we make the claim that definitive evidence for life has been found,” said Sherry Cady of the Pacific Northwest National Laboratory in Richland.

Sadly it seems unlikely that a definitive answer is going to be found anytime soon. 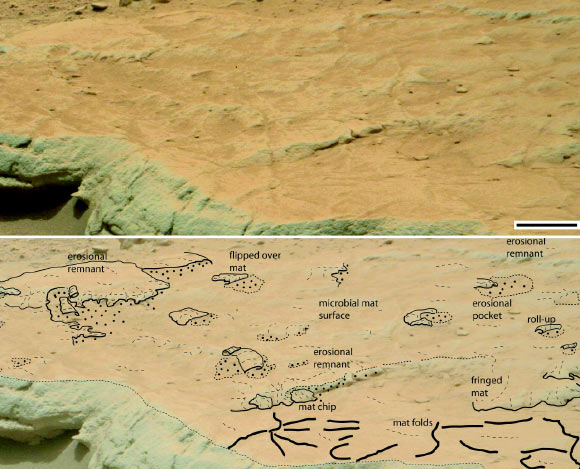 Dr Noffke’s study, published in the journal Astrobiology, compares about a dozen photos taken by the Curiosity with photos of microbially induced sedimentary structures (MISS) on Earth.

“Although Mars today is much colder than Earth and seems only to have water in ice and vapor forms, scientists believe that it must have been a very different place 3.7 billion years ago – warmer, wetter and with a much thicker atmosphere.”

“Why the climate then was more hospitable to life is puzzling, but this could have been caused by volcanoes, orbital changes or large asteroid impacts.”

Whatever may have caused the life-allowing conditions, Dr Noffke said that photographs from Curiosity clearly show sediment deposits resembling those she has found in modern salty settings at Portsmouth Island, N.C., and Bahar Alouane, Tunisia; in playa lake sediments cropping out of the Mediterranean coast in Tunisia; and in Archean salt deposits of the Pongola Supergroup in South Africa and the Dresser Formation in Australia. 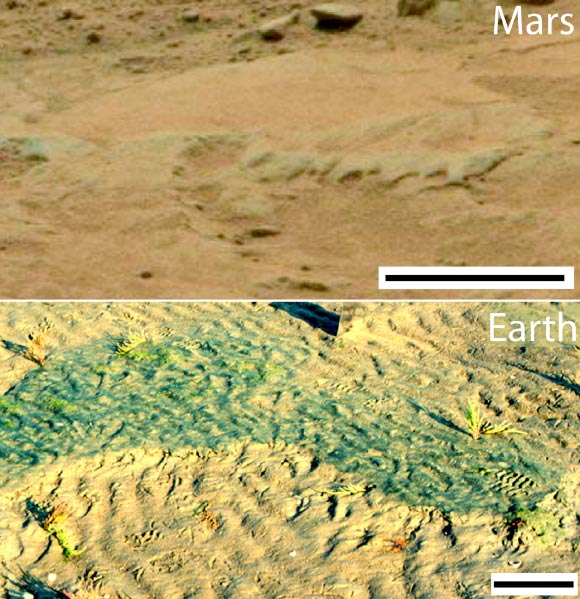 Still, Dr Noffke acknowledges that any remote analysis of imagery has its drawbacks.

“Without any evidence for life on Mars detected in returned rock samples, reconstructing microbial ecosystems on the Red Planet is pure speculation,” she said.

She suggests a well-founded hypothesis that the structures seen on the Mars images may be ancient MISS.

“The Gillespie Lake Member on Mars records an ancient playa lake system. The rocks display a variety of sedimentary structures that have equivalent macroscopic morphology to terrestrial MISS that formed in similar environmental settings,” Dr Noffke wrote in the Astrobiology paper. 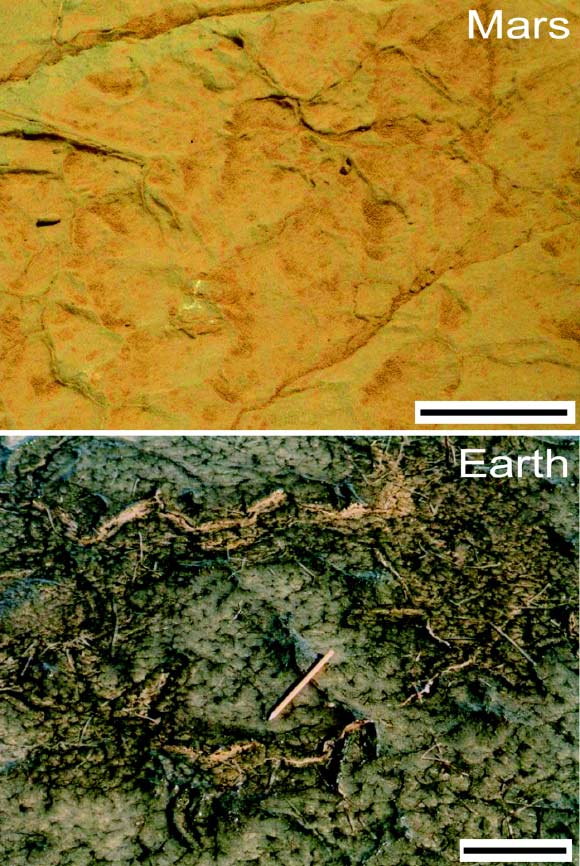 “The Martian sedimentary structures are not distributed at random but form distinct associations and temporal successions related to specific facies zones. The same facies-related structure associations and their changes over time are formed by MISS on Earth. If the Martian structures are found to be fossil MISS, they will mirror an ecological change of ancient microbial mats in a regressive playa lake system.”

“Based on the observations made in Curiosity’s Mastcam photographs of three main characteristics of the Gillespie Lake Member outcrop, this study has led to the following hypothesis: the sedimentary structures in the Gillespie Lake Member are ancient MISS produced by interactions between microbial mats and their environment. This hypothesis is testable and warrants further scrutiny in current and near-term missions to Mars.”