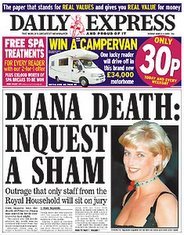 Mohamed al-Fayed waited more than 10 years for the day in open court where he could lay out his theory of high-level conspiracy in the deaths of Princess Diana and his son Dodi, her lover when both died in a Paris car crash in the early hours of Aug. 31, 1997

By arranging for Diana and his son to be killed, Fayed said, Philip and Charles had saved the royal family from having the princess marry a Muslim and bear his child.   “They cleared the decks,” he said. “They murdered her.”

On 31 August 1997, Diana, Princess of Wales died as a result of injuries sustained in a carwreck in the Pont de l’Alma road tunnel in Paris, France. Her companion, Dodi Fayed and driver, Henri Paul, were also pronounced dead at the scene of the accident. Fayed’s bodyguard, Trevor Rees-Jones, was the only survivor, and was believed to be the only occupant wearing a seatbelt, until a 2006 study that said none of the four were.

An eighteen-month French judicial investigation concluded in 1999 that the car crash that killed Diana was caused by Paul, who lost control of the car at high speed while intoxicated and under the influence of antidepressants.

Accidental death caused by unfortunate circumstances or messy assassination cover up including the Royal Family?

So what are the facts ? and why does Fayed, and others think Diana was killed by a secret government plot?

Princess Diana’s Letter Warned of Death Plot Against Her.

A former butler to Princess Diana says she suspected a plot to kill her, 10 months before her death in a car accident in Paris in 1997.

Paul Burrell says he received a letter from the princess in October 1996, saying her death would clear the path for Prince Charles to remarry. The princess died in the crash the year after the royal couple’s divorce became final.

A British tabloid, The Mirror, reported Monday Mr. Burrell describes the letter in a new book called A Royal Duty.

The report says the letter includes the name of the person Princess Diana suspected of planning to tamper with her car’s brakes. But the newspaper declined to publish the name for fear of a lawsuit.

Last year, Mr. Burrell was accused of stealing hundreds of Princess Diana’s belongings. But the trial was abruptly called off after Queen Elizabeth told prosecutors Mr. Burrell offered to look after the items. The British press said at the time that the Queen acted to prevent undue publicity regarding the royal family.

Some information for this report provided by AP and Reuters.

Questions raised by the offical investigation into Dianas death hint at a conspiracy.

Whether the road/tunnel layout and construction were inherently dangerous and, if so, whether this contributed to the collision

Whether any bright/flashing lights contributed to or caused the collision and, if so, their source

Whether Andanson was in Paris on the night of the collision

Whether Diana was pregnant

Whether and, if so in what circumstances, the Princess of Wales feared for her life

The circumstances relating to the purchase of the ring

The circumstances in which Diana’s body was embalmed

Whether the evidence of Tomlinson throws any light on the collision

Whether correspondence belonging to the Princess of Wales (including some from Prince Philip) has disappeared, and if so the circumstances