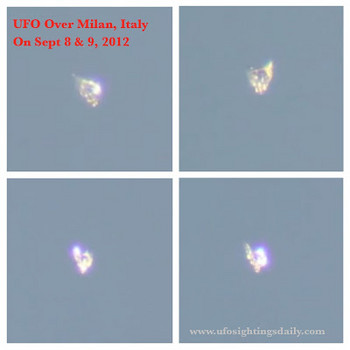 This week Italy appears to have been visited by a UFO. The witnesses reportedly believe that they saw an Extraterrestrial entity.

“Both Saturday 8 and Sunday, September 9, we spotted and taken an extraterrestrial spacecraft and we were not the only ones who see it, there are many people who are willing to testify.”

Mr. Waring reports that there have been many UFO sightings in the Milan region of Italy.

“We know that is not the only UFO sighting that Urzi Antonio and Simona Sibilla have recorded with their cameras. Now sightings are countless.”

Mr. Waring confirms multiple witness can testify to seeing the UFO activity which was video recorded and distributed by Mr. Waring.

“To confirm this Saturday the 8th, not only are there dozens of people but also videos and photos.”