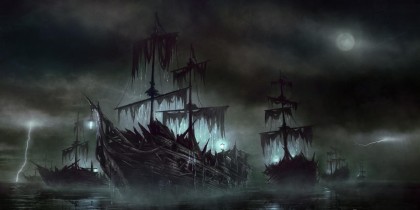 1. In maritime folklore, no ghost ship is more famous than the Flying Dutchman, which has inspired numerous paintings, horror stories, films, and even an opera. The ship was first mentioned in the late 1700s in George Barrington’s seafaring book Voyage to Botany Bay,

2. The legend of the Flying Dutchman is one of those stories that the crew might pass along when a ship is in trouble. There are various versions of the story, all with similarities shared with the legends and myths that preceded it. But one thing is for sure: the Flying Dutchman is a ghost ship that warnes the beholder of impending tragedy.

3. The Flying Dutchman was a vessel out of Amsterdam that was captained by a man named Van der Decken. The ship was making its way toward the East Indies when it encountered dangerous weather near the Cape of Good Hope. Determined to make the crossing, Van der Decken supposedly went mad, murdered his first mate, and vowed that he would cross the Cape, “even if God would let me sail to Judgment Day!”

4. During the nineteenth century, there were reliable reports of sightings of the Flying Dutchman. An English ship’s log of 1835 stated that the captain and ship’s crew saw the vessel bearing down on them “with all sails set” during a heavy gale. Despite his best efforts, the ship sank in the storm, and as the legend goes, Van der Decken and his ghost ship are now cursed to sail the oceans for all eternity.

5. To this day, the Flying Dutchman continues to be one of the most-sighted of all ghost ships, and people from deep-sea fishermen to the Prince of Wales have all claimed to have spotted it making its never-ending voyage across the oceans.Another entry in the log of the Bacchante in 1881 reported that the Flying Dutchman crossed their bows, glowing with a strange red light before suddenly disappearing into a clear, calm night. Thirteen persons saw the phantom vessel, and two other ships in the vicinity reported seeing a strange red light.

6.  Despite the descriptions of ghoulish glows, scientists have offered a more reasonable explanation: the Flying Dutchman could be a ‘fata morgana‘, a mirage that occurs when, in calm weather, warm air rests right above dense, cold air near the surface of the ocean. The air between the two masses acts as a refracting lens, which will produce an upside-down, distorted image of the upright object. Even though a ship may be beyond the horizon, the observing crew may see an inverted, blurry image of the “mirage ship” that could appear several times larger than its actual size, and much closer.