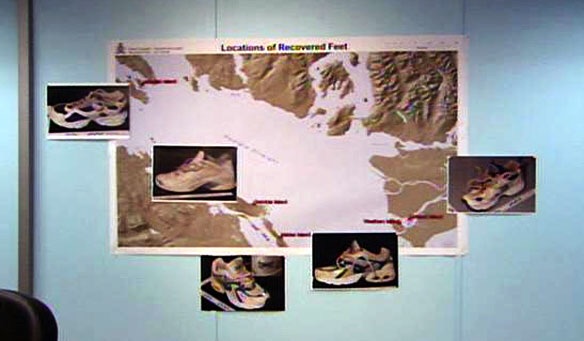 Since August 2007, seven disarticulated (legless) human feet have been discovered in coastal British Columbia, Canada, and an eighth in nearby Washington, United States.

The feet belong to five different men and one
woman. The first foot was discovered on August 20, 2007, on Jedediah Island, by a girl visiting from Washington. The girl found the foot when she picked up a shoe and opened the sock. The foot was that of a man, and was found wearing a size 12 Adidas shoe. It is thought to have become disarticulated due to submerged decay.

Six days later another foot was
discovered by a couple on Gabriola Island. It was waterlogged and appeared to have been taken ashore by an animal.

The fifth foot was found on June 16, floating in water near Westham Island, part of Delta.

Another foot was discovered on August 1, 2008, by a camper on a beach
near Pysht, Washington. It was covered in seaweed.

The site of the discovery was less than 16 kilometers from the international border in the Strait of Juan de Fuca.

Two more feet were discovered on beaches in Richmond.