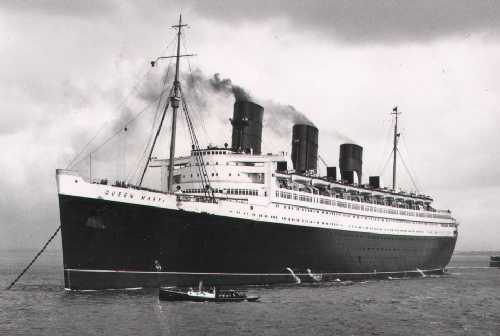 Commissioned by Cunard Steamship Company, Ltd., the ship was built in Scotland and launched in 1934. After Her Majesty Queen Mary presented her personal standard, it embarked on its maiden voyage on May 27, 1936, departing Southampton. It took only five days to reach New York and in record time, won the Blue Riband for fastest North Atlantic crossings after six such trips.
One of the largest passenger liners ever built, the Queen Mary made over 1,000 crossings. During World War II, it was given the name, “Grey Ghost” when it was camouflage painted, its portholes blacked out and it began military transport. Servicing the war effort, it traveled more than 600,000 miles and carried over 800,000 troops. One historic journey to New York in May of 1943 included passenger Winston Churchill and 5,000 German prisoners of war.
Queen Mary ship contains (4) 40,000 hp turbine steam engines, travels 13 feet to the gallon, has 4 propellers weighing 35 tons each, a 140 ton rudder and weighs 81,234 tons. In its glory days, it carried 1957 passengers serviced by a crew of 1174.

The Queen cost the city about $3.5 million to purchase, stands 140 feet tall, over 1000 feet long and 145 feet wide. It offers tours, a hotel, shops and restaurants but is also used in movies and television productions. While rumored to have ghosts, guests say that simply adds to the charm of an historic (though not very seaworthy) ship. If you’ve seen the movie, Titanic, see a real survivor, Queen Mary.

Surviving World War II and recent attempts to be “shipped” to Japan, an elegant Queen Mary remains permanently docked in the Long Beach harbor. The city purchased it in 1967 and opened doors to the attraction after three years of renovation. Restaurants, shops, tours, entertainment, banquet facilities and a hotel with 365 staterooms and suites provide opportunities for guests to relive the past. Included in the National Register of Historic Places, the stately ship contains beautiful wall murals and carvings made of precious and rare woods plus a large, sweeping ballroom with light fixtures and ornamentation befitting a queen.

Queen Mary has been docked in the Long Beach Harbor for over 30 years. During this time, it has featured Jacques Cousteau’s “Living Sea” Museum, Howard Hughes Spruce Goose flying boat next door in the dome, Titanic traveling exhibit, Treasures of the Last Russian Emperor and Scorpion Russian submarine. Docked at the bow of the Queen Mary for several years, the previously top secret Foxtrot class sub is open for tours.