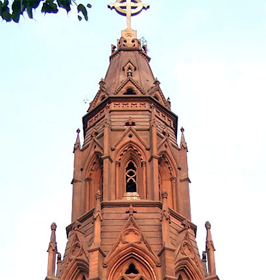 The gothic style memorial in front of Old Telegraph Building, Kashmiri Gate is known as Mutiny Memorial. Later it was renamed in 1972 as ‘Ajitgarh’. This is dedicated to the official who died in the Indian mutiny in 1857. There are some rumours later, many dead bodies of British officials have found from the memorial. Dead officers’ heads were separated from their bodies. Also, some people believed there tragedy repeats there in the form of some ghostly shadows sometime. It becomes spooky with those haunted souls.

Sultanate rule, Mughal era, Queen’s time and finally in free India. Delhi remained as “heart of India” forever. With shinning new India, New Delhi turned into the high tech city, but old Delhi remained same for Delhi lovers. Walking in Delhi is like touching the history. more over 1300 remnants signs for its past rulers. Palace, Forts, Tombs, minors. Almost each of them carrying stories of sorrow, curse, betray and lament for loved ones. In spooky Delhi somewhere lady runs with cars, somewhere people light the road for phantom beings. More stories are filing Delhi’s haunts. Keep in touch.