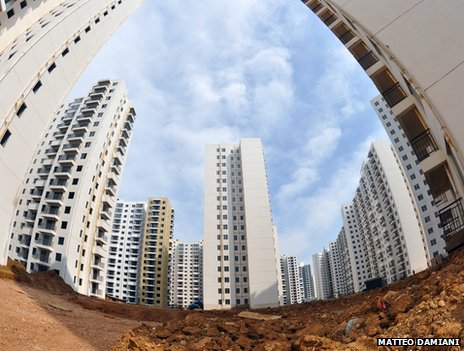 Now the biggest Ghost Town in Asia, its the new (empty city) of Chenggong.

“In Chenggong, there are more than 100,000 new apartments with no occupants,” according to local residents “It looks to outsiders as though the great Chinese building boom is over, the real estate extravaganza that shook the world.”

High-rise apartment blocks have mushroomed but today it is still largely deserted after failed attempts by the authorities to attract new residents. Apartments are almost as cheap as the now worlds largest modern ghost town of Detroit, USA.

Matteo Damiani, journalist who worked for seven years in Kunming, has visited Chenggong several times, photographing empty tower blocks – pleaase visit his site to see more amazing pictures. “The suburbs and even the city centre are empty,” he says. “You can find a big stadium, shopping malls and hundreds of buildings finished but abandoned.”

There is even an area for luxury villas that is totally abandoned, he adds.