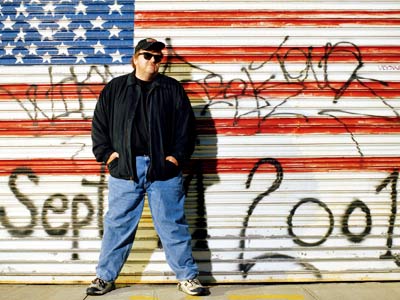 Michael Moore’s view on what happened to the United States after September 11; and how the Bush Administration allegedly used the tragic event to push forward its agenda for unjust wars in Afghanistan and Iraq.

Michael Moore is a dangerous man. You wouldn’t know it to look at him — sprawled sockless, scruffy, and wearing a ”Made in Canada” cap on a couch in his Manhattan offices — but he is very, very dangerous. Because Michael Moore is a man who is trying to unseat a President.

Starting with Florida and twisting its way through the war in Iraq, Moore’s new movie, ”Fahrenheit 9/11,” by turns humiliates, condemns, and brutally diminishes the President and his inner circle. It’s a polemic that fails to mention the name John Kerry once but leaves no doubt as to whom the director thinks should be our next leader