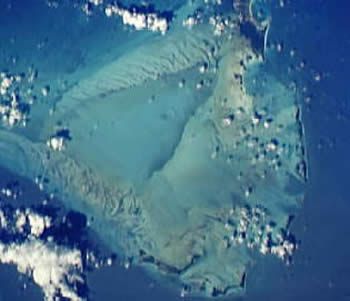 Oceanographic surveyors of the sea floor in the area of the Bermuda Triangle and the North Sea region between continental Europe and Great Britain have discovered significant quantities of methane hydrates and older eruption sites.

(CHICAGO) – According to two research scientists the mystery of vanished ships and airplanes in the region dubbed “The Bermuda Triangle” has been solved.

Natural gas—the kind that heats ovens and boils water—specifically methane, is the culprit behind the mysterious disappearances and loss of water and air craft.

The evidence for this astounding new insight into a mystery that’s bedeviled the world is laid out in a research paper published in the American Journal of Physics.

Professor Joseph Monaghan researched the hypothesis with honor student David May at the Monash University in Melbourne, Australia.

The two hypothesized that large methane bubbles rising from the ocean floor might account for many, if not all, of the mysterious disappearances of ships and aircraft at specific locales around the world.

Researcher Ivan T. Sanderson identified these mystery areas during the 1960s. Sanderson described the actual shape of these regions as more like a lozenge rather than a triangle. Some of the more famous spots include an area in the Sea of Japan, the North Sea, and of course the infamous “Bermuda (or Devil’s) Triangle.”

Oceanographic surveyors of the sea floor in the area of the Bermuda Triangle and the North Sea region between continental Europe and Great Britain have discovered significant quantities of methane hydrates and older eruption sites.

Because of the correlations and existing data, the two envisioned what would happen when gigantic methane bubbles explode from natural fissures on the seafloor.

The methane—normally frozen at great pressure as gas hydrates embedded within subterranean rock—can become dislodged and transform into gaseous bubbles expanding geometrically as they explode upwards. When these bubbles reach the surface of the water they soar into the air, still expanding upwards and outwards.

Any ships caught within the methane mega-bubble immediately lose all buoyancy and sink to the bottom of the ocean.

Aircraft falling victim to these methane bubbles will lose their engines-perhaps igniting the methane surrounding them-and immediately lose their lift as well, ending their flights by diving into the ocean and swiftly plummeting to the sea bottom.

In most cases little or no wreckage would be found by searchers.

Using the latest in computer modeling, Monaghan and May tested their theory. The modeling program, based on the scientific principles of fluid dynamics, accounted for all the variables including the velocity of a giant methane bubble, its pressure, and the density of the gas and surrounding water.

To provide a check on the accuracy of their hypothesis, the two scientists built a large tank, filled it with water to simulate the regions of the earth where ships and planes have reportedly disappeared over the last century, and launched large methane gas bubbles from the bottom of the tank towards a toy ship floating on the surface of the water.

The results were impressive and the physical tests mirrored the computer model. The two found that the ship sank if it was between the middle of a bubble and its outer edges. If the ship was far enough away from the edge of the bubble—or directly over it—the ship would sail on safely. Despite not sinking, however, if the methane bubble was big enough and the ship was positioned at or near the center of the bubble when it surfaced, every one on the ship could be asphyxiated. This would account for several famous cases where ships were found in the Triangle with everyone aboard dead without a scratch.

As a bubble surfaced the water rose dramatically creating a sphere of water. Yes, the ship would slide off the sphere, but as the bubble burst a huge jet or column of high-velocity water would slam onto the ship and in a matter of seconds drive it down into the murky depths.

Recent surveys in the North Sea region have identified sunken vessels that are very near previous methane venting/eruption sites. What a methane bubble would actually look like, however, as it roars from the ocean depths breaking onto the surface of the sea no one knows.

Anyone who has experienced the phenomenon first-hand is dead.