An asteroid might be about to fly past Earth hair-raisingly close next month – as astronomers predict it could pass us as close as 11,000 miles away.

That’s about a twentieth of the distance between the moon and the Earth – and will fly UNDER some communications satellites.

Asteroid 2013 TX68 is pretty small, thankfully – and astronomers haven’t precisely defined its orbit yet, so it COULD pass as far away as 9 million miles, according to EarthSky.org.

Asteroid 2013 TX68 is estimated to be about 100 feet in diameter, NASA says. By comparison, the asteroid that broke up in the atmosphere over Chelyabinsk, Russia, three years ago was approximately 65 feet (20 meters) wide.

If an asteroid the size of 2013 TX68 were to enter Earth’s atmosphere, it would likely produce an air burst with about twice the energy of the Chelyabinsk event. 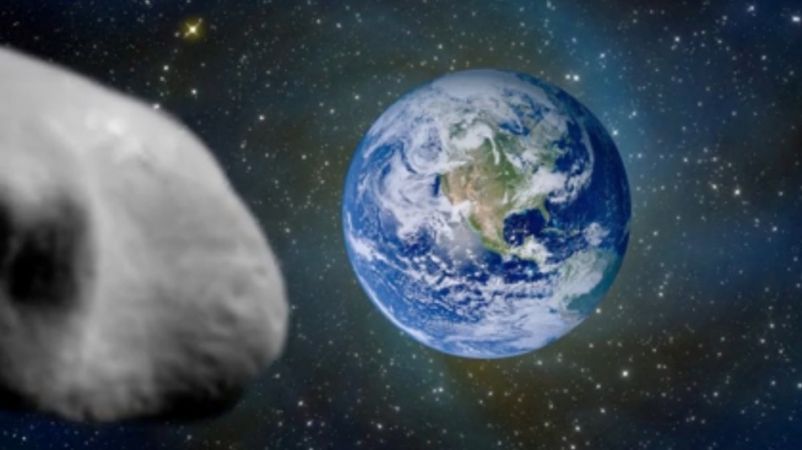 Asteroids are minor planets, especially those of the inner Solar System. The larger ones have also been called planetoids. These terms have historically been applied to any astronomical object orbiting the Sun that did not show the disc of a planet and was not observed to have the characteristics of an active comet. As minor planets in the outer Solar System were discovered and found to have volatile-based surfaces that resemble those of comets, they were often distinguished from asteroids of the asteroid belt. In this article, the term “asteroid” refers to the minor planets of the inner Solar System including those co-orbital with Jupiter.

Scientists at NASA’s Center for NEO Studies (CNEOS) at the Jet Propulsion Laboratory in Pasadena, California, have determined there is no possibility that this object could impact Earth during the flyby next month.

There are millions of asteroids, many thought to be the shattered remnants of planetesimals, bodies within the young Sun’ssolar nebula that never grew large enough to become planets. The large majority of known asteroids orbit in the asteroid belt between the orbits of Mars and Jupiter, or are co-orbital with Jupiter (the Jupiter trojans). However, other orbital families exist with significant populations, including the near-Earth asteroids. Individual asteroids are classified by their characteristicspectra, with the majority falling into three main groups: C-type, M-type, and S-type. These were named after and are generally identified with carbon-rich, metallic, and silicate (stony) compositions, respectively.