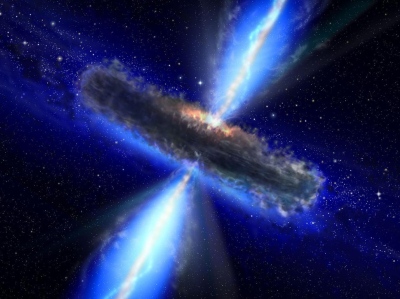 A black hole is a region of space time exhibiting such strong gravitational effects that nothing—including particles and electromagnetic radiation such as light—can escape from inside it. The theory of general relativity predicts that a sufficiently compact mass can deform space time to form a black hole.

SCIENTISTS have been left baffled by the discovery black holes that have aligned in close proximity in a region of the distant universe which has led to some speculating that an advanced alien race is responsible.

A staggering 64 super massive black holes have been spotted all pointing at the same direction and spinning in sync – with experts saying that there is less than 0.1 per cent chance of this happening.

Facts about the Black Knight satellite

It is the first time such a vast number of super massive black holes have been spotted in the same region of the universe. They were all spewing radio jets from their centre.

Professor Andrew Russ Taylor, lead author of the study published in Monthly Notices, said: “Since these black holes don’t know about each other, or have any way of exchanging information or influencing each other directly over such vast scales, this spin alignment must have occurred during the formation of the galaxies in the early universe.”