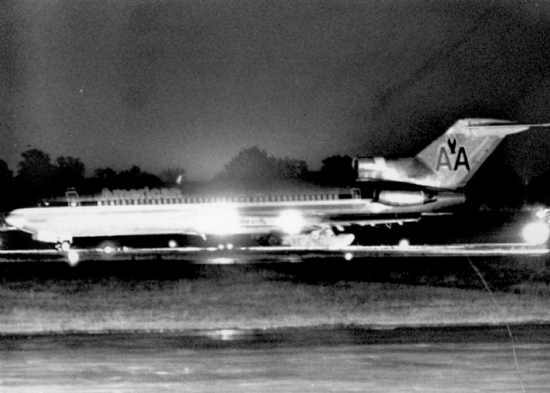 By mid-1972 the DB Cooper copy cat hijack craze was in full swing across the USA. In the ninth copycat-hijacking attempt, Martin J. McNally under the pseudonym of Robert W. Wilson, hijacked a St. Louis, Missouri to Tulsa Oklahoma American Airlines Flight 119. McNally demands $502,500 (picking up on Trapnell’s idea to ask for non-even amounts of cash). McNally forced the pilots to fly the plane back and forth between Tulsa and St. Louis while authorities counted out the $502,500.

This time the hijacker was armed with a .45-caliber submachine gun he snuck on board in a trombone case (I realize security was relaxed in 1972 by today’s post 9-11-01 standards, but really, a machine gun?). When he took charge of the flight, the gunman at first ordered the pilot to return to St. Louis but changed his mind and directed the flight to Fort Worth, Texas. He changed his mind again and ordered a return to St. Louis, where he released all but one of the 92 passengers.

The gunman asked for the money, a parachute and instructions on how to use it. Seeing their chance to apprehend the hijacker, two FBI agents posing as airline officials boarded the plane. One showed him how to use the parachute and how to jump from the airplane but they were unable to grab him because the hijacker kept his machine gun aimed at an attendant.

The pilot reported the hijacker was satisfied with the money and parachute and the plane began taxiing down a runway when a 1972 Cadillac came driving at the plane. St. Louis businessman David Hanley, 30, had been sitting in a motel bar near the airport when he became aware of the unfolding hijacking out on the runway and decided to act. He told a friend “turn on the radio in a few minutes and you’ll hear something that will rock the world” and left. A few minutes later, Hanley began his chase of the taxiing jet at speeds up to 90 miles per hour. He crashed his car (which had been a Mother’s Day present to his wife) through an airport gate onto the runway, went to the end of the runway, turned around and headed straight toward the plane. The Cadillac caromed off the plane’s nose gear and into its landing gear in an attempt to stop the hijacking. The car was demolished and Hanley was critically injured in the crash.

Not to be deterred by such a heroic act of stupidity, the hijacker transferred to a new aircraft and with pilots, crew, and one passenger as hostages, instructed the pilot to head for Toronto and then to head for John F. Kennedy Airport in New York City. McNally never made it to New York; he jumped out over Peru, Indiana. In the air, he became separated from his money and machine gun. The money was found by farmer Lowell Elliott. “I thought it was a groundhog in the field,” Elliott said. “It didn’t move so I took a closer look.” Meanwhile, the gun was found five miles away by another farmer, Ronald Miller, who at first thought the commando-type weapon was a toy when it was turned up by the blades of a liquid fertilizer distributor.

He survived the parachute drop and later, fingerprints led to police and FBI to McNally who was arrested and sentenced to two life terms in prison. While serving time for his crime in Marion Federal Prison, McNally and fellow inmate and hijacker Garrett Trapnell  tried their escapes.