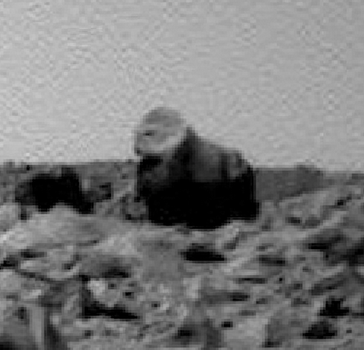 A report posted on UFO Sightings Daily and recently published in The Canadian, claims that life has been discovered on Mars. The report talks about finding a Gorilla-like Creature in few of the photos posted in official NASA website. These photos were sent by the Mars Rover. The website, UFO Sightings Daily, is coordinated by Scott C. Waring. He had been affiliated with the United States Air Force at SAC base (USAF flight line). He currently owns an ESL School in Taiwan. In this report, Scott has published images of the creature, taken from official NASA website, along with a video of the creature posted on YouTube.

“I found this interesting video on YouTube and the person seems to have found an actual animal on the surface of Mars. This creature’s face has a mouth, cheeks, firm eyebrow area, and to top it off it has a gorilla-like body.”

He also talks about the possibility that this could just be an ancient carving that has remained on Mars.

“Of course this could just be another ancient carving that survived the test of time. Remember the other famous statue of a woman human-like figure (actually 3) on mars?”

Mr. Waring also tells us where we can find this image on the official website of NASA,

“This has been on my mind for a while and finally felt it was time to put it on the site. If you want to see it on the NASA site it’s in the upper right corner and the source is below. SCW”

The picture surely looks interesting and we would have to wait and find out if NASA provides any official explanation for this image. Many researchers have Ufologists have maintained that Mars was inhabited by intelligent life forms.